Why Michael Brown and Eric Garner Should Matter to Latinos

Why Michael Brown and Eric Garner Should Matter to Latinos 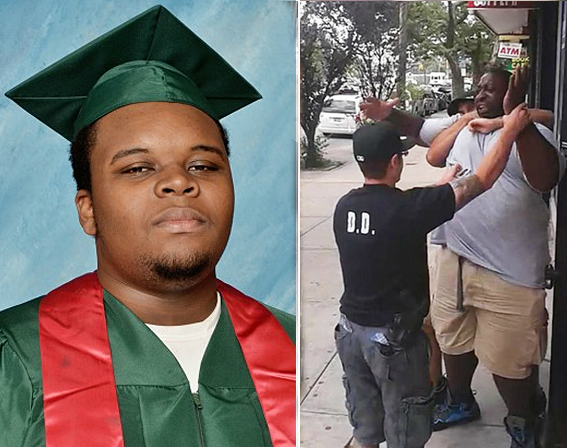 Michael Brown on left and Eric Garner on right

For every action there is a reaction and unfortunately after the grand jury not indict police officer Darren Wilson or officer Daniel Pantaleo – even though both men, Wilson in Ferguson and Pantaleo in Staten Island, caused the death of two unarmed black men, Michael Brown and Eric Garner, respectively – the reaction of citizens letting out their frustrations against a system that has historically let them down was imminent. But should this matter to Latinos in the United States?

Yes it should matter. Latinos in the United States also deal with terrifying racial prejudices that position them to feel harassed, oppressed and scrutinized by those in power like many blacks.

Almost 45 percent of New Yorkers are white while blacks and Latinos are 25 percent and almost 28 percent, respectively. That should mean the New York white population are more likely to get harassed (which would be unfair too) since they are the majority, right? Nope!

According to the New York Police Department’s data collected by the American Civil Liberties Union (ACLU) the police stopped and frisked 685,285 times in 2010. The report indicates that 55 percent stopped were blacks and 33 percent were Latinos while only 9 percent were whites. 88 percent of the people stopped were innocent. Yes, innocent.

The progressive news organization, ProPublica, discovered in a FBI data that young black and Latino males are 21 times more likely to get shot by cops more than young white males in the same circumstance.

Also, Colorlines’s journalist, Erin Dostal, reported that in the suburban neighborhoods in Chicago where 50 percent of the population are white and 25 percent Latinos, the Latinos were twice as likely to be fatally shot by cops. The report quotes Gerald Frazier, the president of a police watchdog group, Citizen Alerts, saying “You always have what I think is a small racism factor—[officers] don’t view different people the same as their own”.

The unfortunate truth is that these stats are very similar in other states like California, Texas and Florida to name a few. But this article is not about us against them. Instead, it’s about showcasing the sad reality of a broken and disturbed system that keeps targeting black and Latinos.