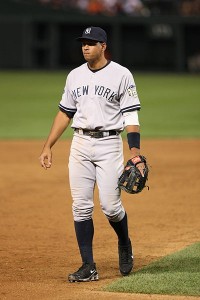 As the Yankees enter spring training, all eyes are on A-Rod and his latest scandal.

Cervelli and Braun confirmed having dealt with Bosch—the owner of the now-shuttered anti-aging Biogenesis clinic in Coral Gables, Fla.—after Yahoo! Sports reported last week that their names appear in records originally obtained by the Miami New Times. The records in question identify Rodriguez as one of Bosch’s clients.

On behalf of Rodriguez, a crisis management firm charged that the records presented by the Miami New Times—at least as it related to Rodriguez—”are not legitimate.” Cervelli and Braun each claimed their business with Bosch had nothing to do with banned substances, but by publicly acknowledging any link to him, they’ve struck a huge blow to Rodriguez’s story.

Rodriguez, expected to miss the first half of the 2013 season recovering from hip surgery, is alleged to have purchased human growth hormone and other banned PEDs from Bosch over the past four years. Four years ago, he admitted using steroids as a Texas Ranger from 2001-03, but has denied ever taking any banned substance since.