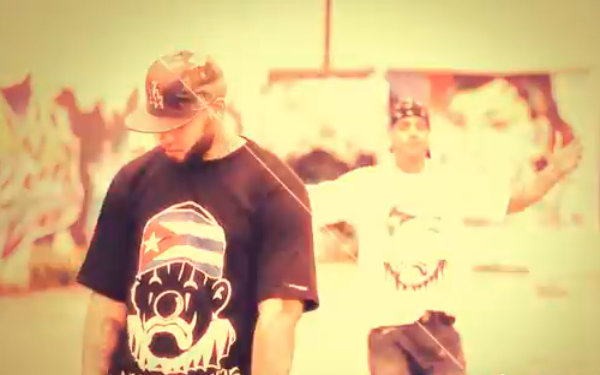 Los Aldeanos in their video “No Le Tengo Miedo”.

It is known that Hip-hop started in the park and not in a U.S. agency’s spy program. Yet, the U.S. Agency for International Development tried to trigger a youth rebellion with anti-government music, reports the Associated Press.

According to an investigation by the AP, the USAID contracted a Serbian music promoter to infiltrate Cuba’s underground hip-hop scene. The promoter, who convinced rappers to hire him, pushed the anti-Castro agenda to groups like rap duo, Los Aldeanos. But the rap group, in 2009, weren’t aware of music promoter Rajko Bozic’s true intentions, which was to “spread democracy” by creating a hostile youth movement in Cuba.

Documents show the U.S. agency continuously put “innocent Cubans and its own operatives in jeopardy despite warning signs.” The report continues to say that Cuban authorities “detained or interrogated musicians” and confiscated computers and thumb drives that linked them to the USAID.

USAID wrote a response to the story stating, “Any assertions that our work is secret or covert are simply false.”

Fortunately, the U.S. secret program didn’t hurt the Cuban underground hip-hop movement that showcases talents like Danay Suarez, who I interviewed and profiled in LatinTrends magazine.

This is not the first time the agency is caught trying to use people to create an anti-Cuban government movement. The AP has reported on how the USAID tried several times to use prominent Cuban musicians and members of the Castro family to create a “revolution”.

Currently, Los Aldeanos, a two-brother rap group, live in Florida. Their music is less political than before, especially in their new single “No Le Tengo Miedo” (I’m not afraid). The song focuses more on conviction as it hit YouTube late August and has over 1.2 million views.

The 10 Richest Druglords Ever!

Poker is a Growing Trend in Latin America