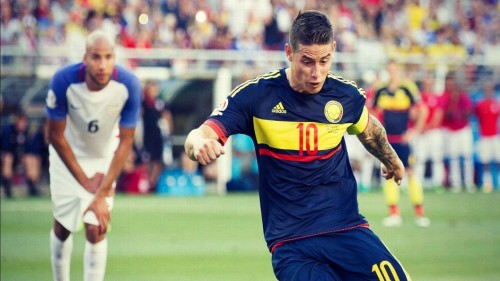 The choice of venue for the opening match of the 2016 Copa America, the “Centenario” if you will, was Santa Clara, California. For Jurgen Klinsmann’s men it was supposed to be the beginning of a statement. However, instead of a show of skill with the feet, it was the hands that marked the defining moment of this match.

Colombia came out quickly showing its quality of play and silenced 67,439 fans at Levi’s Stadium eight minutes in when Cristian Zapata, played a corner kick into a cute tally putting Colombia up first. He eluded two defenders and volleyed it in for his first international goal.

Clint Dempsey has proven to be the most deadly sniper the United States owns. The lethal lefty has scored many crucial goals in the past twelve years including three
World Cups. But the 33-year old found frustration to be the word of the day. He re-directed the ball just pass the post on one occasion and saw another shot that usually finds the net making friends with the boards.

“Clint was a warrior out there giving everything he had,”

“He was really fighting that fight very positively until the very last second.”

The problem was that the United States, with eight players who appeared in the 2014 World Cup, could not find another to match Dempsey’s desire. They remained a single goal away from a draw and Colombian star striker James Rodriguez had not yet put a stamp on the game. In fact he aggravated a shoulder injury when he as taken down later in the match.

But it was Michael Bradley, the U.S. Captain, who doesn’t make many mistakes, turning the ball over and then DeAndre Yedlin who turned away from Farid Diaz’ cross attempt with his hand open. The ball found it and a red-card penalty called in the 65th minute. ”

That penalty decision had a big impact,”

James Rodriguez put it away and the 2-0 scoreline held for Colombia. The third-ranked Colombia took advantage of the change in goal as the long-tenured Tim Howard was replaced by Brad Guzan for this tournament. Guzan was the number one goalie for Aston Villa in England last year. The U.S, in Group A plays Costa Rica Tuesday in Chicago while Colombia will get Paraguay on the same day at Pasadena, California.

Donald attacks Mexicans now he will be Judged in Supreme court by a Mexican American
Adidas spends $$ MILLIONS on soccer ads with HUGE typo & Colombians are FURIOUS!
Translate »
%d bloggers like this: