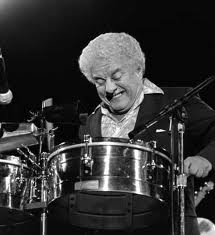 Know as El Rey of the Timbales, Tito Puente was also known for his bright smile and enthusiastic showmanship with the timbales even after his death in 2000. Known for paving the way for other Latino Musicians to break out in Latin Jazz and Salsa, Puente’s personal life has been shadowed by his bright smile and highly-profiled career but in a soon-to-be released tell-all memoir Mambo Diablo: My Journey with Tito Puente, author, publicist, and close friend Joe Conzo shows a different side of the man known as El Rey.

Along with journalist David A. Perez, Conzo records his forty years of knowing Puente and tells the world of Puente’s “private life” which he was privy to. Aside from sharing anecdotes about the legendary six-time Grammy winner’s life as a musician, Conzo reveals Puente’s life as a Casanova, frequent drug user, and serious Santeria worshipper.

Meeting the East-Harlem native before he rose to international fame pounding out the rhythmic beats of mambo, Conzo sees his budding friendship with Puente as destiny having met him twice in passing in 1959 and again 1960 right as Puente was about to be the second Latino orchestra to play in Japan after fellow legendary Latino musician, Machito. Many like Conzo feel that, Puente “opened the door to everyone, whether it was Puerto Rican, Cuban, whatever…if it wasn’t for Tito Puente, we don’t know where our music would be.”

Despite passing away in 2000 and leaving behind an impressively long legacy that spans four decades, Conzo intentions for writing the tell-all about Puente in order to keep his legacy alive.  When asked in a interview with the Daily News whether Puente’s is still a influence in the Latino community, Conzo replies that, “Hispanics don’t know about their culture. If you ask kids, particularly those born here, ‘Who is Tito Rodriguez? Who is Machito? Who is Daniel Santos? They don’t know…and they look at you, ‘Who?’” And when young Latinos don’t know Tito Puente, Conzo makes a reference that reminds us that we may not know Puente but we’ve encountered him when he mentions the “Nissan commercial, the one with a man in once car and a woman in the other that starts, ‘Oye como va…’? And I say, he wrote it.”

Aside from detailing Puente’s rise into the legendary Latin Jazz musician, Conzo tells of Puente’s occasional drug use of cocaine because, “In the ‘60s, ‘70s, the ‘80s cocaine was everywhere,” but his intentions wasn’t to show Puente in a negative light because, “Tito wasn’t a drug addict, it was an occasional thing that he did. Instead, Conzo documents how he was the heavy drug user and despite his flaw, Puente, “never rejected me. Neither him, nor Machito. They never turned their backs on me.” Another purpose for bringing out Puente’s minor use of cocaine was to show how, “as a human being [Puente] had his faults but he also was a genius.”

In the book, Conzo also alludes to Puente’s life a quite the womanizer but comes to his deceased friends defense but stating, “Most men in that business are womanizers.” And while Puente’s was like most musicians, Conzo doesn’t give any names out of respect to Puente’s widow, Margie who relates a request she asks of him about being, “’very grateful if you don’t mention names,’ And I didn’t mention names. Out of respect.” However, in a recent staged show “They Call Me La Lupe,” about the Cuban singer La Lupe played by Lauren Velez, it is hinted that Lupe and Puente were romantically linked in the 1970s which Conzo describes as, “It never happened.” One name that can be crossed-off Puente’s conquests list.

Aside from talking about Puente’s musical climb, drug use, and encounters with the opposite sex, Conzo mentions in his book about Puente’s becoming a Santero priest within the Santeria Religion but doesn’t go into detail about the process. And despite the book being a memoir about the private life of the timbales   performer, Conzo still respects Puente’s private life enough when he says, “I respected him in life and also in death. I used to tell people who were going to interview him, don’t ask him about his private life—or religion. He was very private about that,” opting to keep some things sacred to the decease musician still private.  Conzo will be signing copies of his book Monday, February 14th at the Harbor Conservatory at 1 East 104th St. 5th Ave at 7pm where Bandleaders Louis Bauzo and Jose Madera Jr. will be performing at the music event.