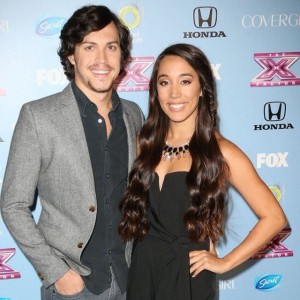 Last night the third season of FOX’s hit reality singing competition X Factor came to an end with singing duo Alex and Sierra earning the million dollar recording competition with SONY. The first group winner of show beat out Carlito Olivero and Jeff Gutt, the two—in order—came in 2nd and the latter 3rd.

A hit on Itunes the couple have the most singles downloaded after live shows. The dating duo Alex Kinsey and Sierra have become a noticeable pair online as well on television. The two can thank the fans they’ve attracted via YouTube who probably helped them stay in the competition, as well as audience members at home who couldn’t help but fall for heartfelt sounds of the singing pair.

“We are speechless,” said Alex, about the win “this is incredible.”

In a message to viewers who helped her and Alex win, Sierra was full of appreciation, “Thank you so much for getting us here, and thanks for not making fun of my weird faces all of the time.”

Through their journey on the show the pair had been coached by X Factor creator Simon Cowell who used his vast knowledge about the music industry in furthering the pair’s success. His coaching paid off as Alex and Sierra won and ended the night singing an emotional rendition of Say Something by A Great Big World. 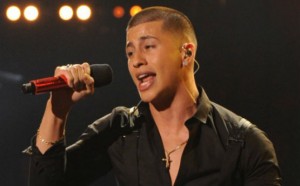 While he did not win Carlito Olivero, 24, made quite an impact on the show. Bringing a bilingual sound into the competition, Olivero not only represents the changing face of this country but exposed the entire country to it.

“You don’t understand – you just made my dream come true. I love y’all so much. Latinos forever,” said Olivero, after being voted into the top 3.

The future is bright for Alex and Sierra, as it is for Carlito Olivero, who will surly go on to make music magic.