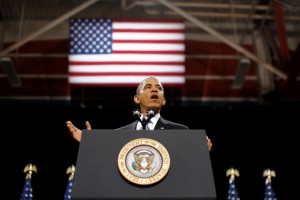 “The time is now. Now is the Time. Now is the time,” Now. Standing before a podium displaying the Presidential seal of the United States, President Barack Obama addressed an enthusiastic audience at Del Sol High School in Nevada this Tuesday where he made a very affirmative stance on what is in store for America during his second term: taking action.

During his inauguration speech President Obama saw one way to approach challenges facing this country isn’t by settling every debate and ignoring any difference we may have but we must simply act in facing these challenges. “I know that some issues will be harder to lift than others. Some debates will be more contentious. That’s to be expected.”

Before the buzzed crowd of Nevadans, before American audiences tuning in to the televised appearance, President Obama announced his Comprehensive Immigration Reform. “I came here today because of a challenge where the differences are dwindling; where a broad consensus is emerging; and where a call for action can now be heard coming from all across America. I’m here today because the time has come for common-sense, comprehensive immigration reform.”

“It’s time to fix a system that’s been broken for way too long…now is the time to find a better way to welcome the striving, hopeful immigrants who still see America as the land of opportunity.”

A debated issue for many years now, immigration reform in America has constantly been tossed back and forth between those in government. With no solution into handling what has been known as the “immigration situation” or “immigration problem” some states and their senator have tried to “solve” the matter. However, such plans only promised racial discrimination and violation against human rights.

Reminding everyone what this country was, what it was built upon, President Obama reminded us all how the United States of America was—are defined—as a nation of immigrants; a definition which has always been our greatest strength since we have been the stage for individuals venturing to our shores and aiding in its growth into becoming one of the most powerful countries.

“Immigrants helped start businesses like Google and Yahoo! They created entire new industries that, in turn, created new jobs and new prosperity for our citizens. In recent years, one in four high-tech startups in America were founded by immigrants.”

Instead of allowing immigrants to help, they are condemned and mostly viewed as criminals. “Yes, they broke the rules. They crossed the border illegally. Maybe they overstayed their visas. Those are facts. Nobody disputes them. But these 11 million men and women are now here…and the overwhelming majority of these individuals aren’t looking for any trouble. They’re contributing members of the community. They’re looking out for their families. They’re looking out for their neighbors. They’re woven into the fabric of our lives.”

During his first term, President Obama made attempts to mend the immigration system: placing security at the borders to lessen the tide of illegal immigrants which resulted in crossing dropping nearly 80%; turned the focus of law enforcement on actually criminals who are living illegally in America and threatening our communities which as a result deportations of criminals are at its highest today. But one specific attempt Obama and his administration made was taking on the cause of the DREAMers.

DREAMers are the young immigrants who were brought to this country as children and have grown up here planting their lives into America’s soil like other children around them. While DREAMers grew up in America they were excluded from obtaining certain American chances like obtaining an education. DREAMers are (or were) children left at the fence of both living as a citizen but also being an illegal immigrant.

“We took up the cause of the DREAMers…we said that if you’re able to meet some basic criteria like pursuing an education, then we’ll consider offering you the chance to come out of the shadows so that you can live here and work here legally, so that you can finally have the dignity of knowing you belong.”

DREAMers are a sub-group of immigrants who can help our country grow. Raised in America, educated in America, DREAMers can give back to the country if permitted to attain an education like other Americans. Even international students who travel to this country for an education; living in the country as they attain a degree they fall in love with what is around them but once they’ve graduate should they be forced out if they want to stay? DREAMers and International students can help in this country’s growth.

“Right now, there are brilliant students from all over the world sitting in classrooms at our top universities. They’re earning degrees in the fields of the future, like engineering and computer science. But once they finish school, once they earn that diploma, there’s a good chance they’ll have to leave our country. Think about that.”

President Obama deepens the visual of this thought by explaining how, “Right now in one of those classrooms, there’s a student wrestling with how to turn their big idea — their Intel or Instagram — into a big business. We’re giving them all the skills they need to figure that out, but then we’re going to turn around and tell them to start that business and create those jobs in China or India or Mexico or someplace else? That’s not how you grow new industries in America. That’s how you give new industries to our competitors. That’s why we need comprehensive immigration reform.”

Despite acknowledging early that the pursuit of acting to make the comprehensive immigration reform happen—or any plan to address a challenge—may draw some tension between the two opposing parties, Obama acknowledged that “Republicans and Democrats seem ready to tackle this problem together. Members of both parties, in both chambers, are actively working on a solution.”

This bipartisan group of Republican and Democratic senators has drafted a set of principles for the comprehensive immigration reform, according to the President, resembles the principles he’s proposed and campaigned for through the last few years.
“But this time, action must follow. We can’t allow immigration reform to get bogged down in an endless debate. We’ve been debating this a very long time.”

President Obama believes that enforcement is key and plans on strengthening border security; he also plans on cracking down on businesses which hire undocumented workers, and help the 11 million immigrants living in the country illegally by obtaining citizenship. Under the new comprehensive immigration reform the pathway for illegal immigrants seeking citizenship will involve a background check, paying taxes, paying a penalty, and learning English.

“It won’t be a quick process,” President Obama notes, “but it will be a fair process. And it will lift these individuals out of the shadows and give them a chance to earn their way to a green card and eventually to citizenship.”

The current system is one that contains one too many barriers and a lack of support for illegal citizens trying to obtain a citizenship.

“We’ve got to bring our legal immigration system into the 21st century because it no longer reflects the realities of our time,” President Obama goes on to demonstration how the current system fails to meet the society of our time, “For example, if you are a citizen, you shouldn’t have to wait years before your family is able to join you in America.”

The comprehensive immigration reform appears to be a more formal demonstration of the previous attempts to reform the immigration system President Obama and his administration have enacted.

“The question now is simple: Do we have the resolve as a people, as a country, as a government to finally put this issue behind us?” I believe we do. I believe that we do.”