The Puerto Rican Day Parade is Back On!

The Puerto Rican Day Parade is Back On! 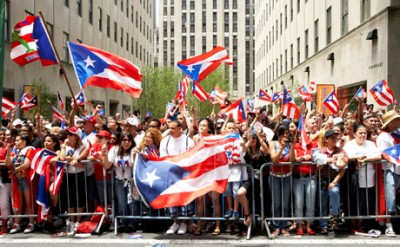 Well, the fog has cleared and the parade is BACK ON!

However, the fate regarding the annual event to be held on the second Sunday of June was left in the air on whether or not New York City would see another vibrant parade honoring Puerto Ricans after an investigation saw to the shake-up of the board that organizes it.

Back in February, Attorney General Eric Schneiderman announced his decision to oust the board members of the National Puerto Rican Day Parade Inc.—or NPRDP for short—after his investigation found that the board was mishandling contributions made towards the continued running of the event.

According to the Attorney General’s Charities Bureau’s investigative report, it was discovered that there was “no evidence that the [board] members engaged in any improper conflict-of-interest transactions,” however, while the members were found to not to be engaging in seedy transaction the bureau believed that members failed “to implement the most basic financial controls or exercise meaningful oversight” when it came to Carlos Velasquez.

In charge of the parade’s fund-raising and marketing, and using his marketing and advertising corporation called GALOS, Velasquez was discovered to have misappropriated an estimated $1.4 million that was intended for the parade and used airline vouchers for JetBlue and American, which were donated by parade sponsors, for his own use.

The investigation uncovered that since 2008, Velasquez repeatedly used the donated vouchers estimating at more than $275,000 from JetBlue and American airlines for personal use for him, his family, or business purposes that were not related to the parade.

In-addition to using vouchers for personal use, Velasquez also established a separate non-profit foundation—which he marketed—which promised to provide parade scholarships to Puerto Rican youth and on its 2012 tax form it was documented that a total of $41,000 in scholarships were awarded. However, Schneiderman only found documentation that stated only $9,500 was awarded.

After the investigation, Velasquez and his GALOS Corp. agreed to deal that would require both to repay the organization and accept a lifetime ban from taking part in the parade’s future dealings.

Along with Velasquez being removed from the parade, three of the parade’s six committee voting directors resigned from their position. Chairperson Madelyn Lugo, Lugo’s husband parade coordinator Luis Rivera, and treasurer Shirley Cox resigned themselves from the board. Joining the three, honorary directors, Maria Roman Dumen and Rosalinda Ortega also gave in their resignation.

In place of the board members who resigned, nine new directors have been named to the parade committee’s board. Maria Elena Girone, the president of the Puerto Rican Family Institute; former Secretary of State Lorraine Cortés-Vazquez, and an executive for Cablevision Ululy Rafael Martinez are the new board members of the NPRDP.

And now with the new board in place it seems that there will be in fact a 2014 Puerto Rican Day Parade.

Yesterday, the board of the National Puerto Rican Day Parade, Inc. was joined by the 2014 Parade honorees in a press conference to make announcements and release an update on the June 8 parade.

“It’s just really inspiring to see people that are giving of themselves to make sure that this tradition continues, because it means so much,” said City Council Speaker Melissa Mark-Viverito at the press conference. Mark-Viverito, along with Representative Nydia Velazquez, will be a grand marshal in this year’s parade.

With the parade only weeks away, Mark-Viverito assured reporters that the parade will go on and will be the prideful and exciting event it has been in the past. The new board of the NPRDP are currently being aided by the speaker’s staff giving aide to the parade organizers.

So far the parade has earned $700,000 in donations, according to one of the new board chairperson Lorraine Cortés-Vazquez. The donations collected so far are from corporate sponsors like Coke and McDonald’s.

Although the board of the NPRDP only have a few weeks to plan and learn what it takes to organize a parade, Mark-Viverito believes in the new board, “There was a thorough vetting of everyone that is on this board, and there’s expectations that are being laid out with regards to the monies that are raised and what it’s being used for.”

So stay tune for more information regarding the parade and prepare to take part this June 8th as the city welcomes the 2014 Puerto Rican Day Parade!

Could Homeless Youth be on the rise in New York City?
Bringing Awarness to Autism
Translate »
%d bloggers like this: