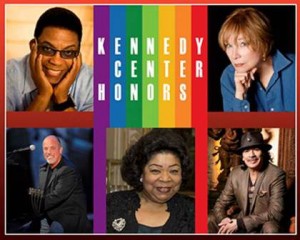 “It is an honor just to be nominated.” This is a phrase often heard at many awards ceremonies when the winner comes up to receive the award. This honor is special in-so-that, the musician Carlos Santana, was the only Latino nominated this year.

Santana shared this award with four other musicians, Billy Joel, Herbie Hancock, Martina Arroyo and Shirley MacLaine that according to The Kennedy Center website. “…has produced balance among the various arts and artistic disciplines.”

The recipients for the award are recognized for the lifetime contribution to the American culture, specifically, the subcategories of the performing arts. These categories are music, dance, theater, opera, movie or television.

The Gala served the purpose of honoring those for this year’s award and to pay homage to the music that brought them to the stars that they are today. Each presenter gave a small speech about each of the honorees and gave a related quote about each of them.

Herbie Hancock “Humble and to the point”

Performances were given by several well-know people of each honoree. A fitting last song to the night was “Piano Man” where veterans, and a choir came out and sang the song for everyone that ended with a standing ovation. Afterwards, there was a final bow from the honorees to signify the induction for the 2013 Kennedy Center Honors.

The Kennedy Center medallions were presented on December 7th followed by a gala the next day. The Honors Gala was aired live on the CBS Network, Sunday, December 29th.