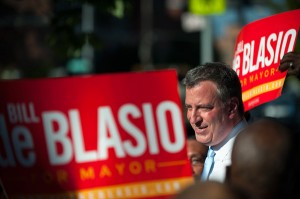 Yesterday many people across the country went out and acted on their civil duty and voted. As we all should know November 5th is Election Day and people took to voting booths to either re-elect or put in new representatives they feel were worthy of their votes.

According to Observers of this years’ election, certain cities and states held important races that could largely show whether or not the National GOP have a relationship with Latinos in the country.

During campaigning hot button issues critical to Latinos, like immigration and so on, were touched upon and heavily focused to pull in Latino support. However, reports are still out on where the National GOP stands with Latinos.

So, far we have two cities where there are showing interesting signs on where the relationship stands.

In New York, Democrat Bill De Blasio earned support from his Latino supporters and earned his bid to become the Mayor of New York City. After courting an estimated 2.4 million Latinos who live in NYC, De Blasion has successfully won the bid that he has been reported to have easily snagged.

De Blasion is the first Democrat to be elected Mayor of New York City. De Blasion beat the Republican candidate Joe Lhota who was the former aide to Rudy Giuliani and ran on a campaign that would continue many of the policies of current Mayor Michael Bloomberg.

Meanwhile, in New Jersey there is celebration in the Christie campaign household because Governor Chris Christie has been re-elected. During his campaign for re-election Christie has reached out to pull in the Latin vote.

For a long time Union City has been viewed as a highly concentrated location for Latino immigrants living in the state with an 85% of Latino immigrants living in the area. Because of its high Latino population, Union City is seen as a strong Democratic area with voters leaning towards electing a Democrat for office. However, Christie—a Republican—was not bothered by this and it may have paid off.

Before the crowd, Christie gave a 10 minute speech declaring, “Union City, you have some of the most amazing diversity in the entire state. You care about each other. You are an inspiration to me as governor, and I hope to inspire you for your votes tomorrow.”

Currently, there is an estimated 1.6 million Latinos living in New Jersey which makes up close to 20% of the state population. New Jersey is the 8th city in the nation where Latinos populate, and in this highly populated Latino area only 680,000 of them are eligible to vote.

According to analyst, Christie was able to win the vote because his opponent Democrat Barbara Buono has been viewed as to not having a more public awareness. Some have reported to knowing very little about her. Despite her lack of presence for voters, Buono has expressed personal political views that mostly connected ones shared by Latino voters.

While both De Blasio and Christie come from different political parties, both were largely expected to win their respective races because of the large support their received from their communities. Latinos and Women who live and can vote in America have been largely claimed to be the two voters any candidate wants to capture if they want to win. So far, it has not yet been question whether or not the GOP have a steady relationship with Latinos…only time will time from here on out if they have managed to reconnect with the growing political movers.

Inventors: Time to Get Paid!