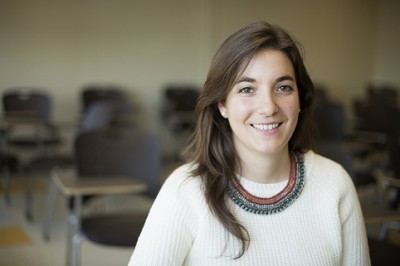 Receiving a fellowship to pursue graduate studies is rewarding recognition for any student. Having the chance to receive the award from royalty is an unusual honor; it’s one that Queens College clinical psychology PhD student Clara Vila-Castelar will enjoy this summer when she returns to her native Spain.

During a ceremony in Madrid, King Juan Carlos I and Queen Sofia will present Vila-Castelar with a prestigious grant from the La Caixa Foundation, a leading private foundation in Spain that supports education and other social causes.

The graduate fellowship from the La Caixa Foundation-USA Program—awarded to only 48 students out of 800 applicants—will support Vila-Castelar as she pursues her studies in the field of aging and Alzheimer’s disease. Beginning in the fall of 2014, Vila-Castelar will receive two full years of paid tuition, as well as a monthly stipend to cover living expenses. She will also receive ongoing personal and professional support as a member of a distinctive international network that helps advance award recipients’ professional careers.

A native of Tarragona, a small city in northeast Spain, Vila-Castelar initially began her undergraduate studies at the University of Barcelona. She transferred to the University of Missouri in St. Louis on a golf scholarship, where she received a bachelor’s degree in psychology.

As a specialist in the field of neuropsychology, Vila-Castelar was eager to pursue her PhD work in the laboratory of Queens College psychology professor Nancy S. Foldi, PhD. As a noted researcher and director of the college’s Neuropsychology Laboratory of Aging and Dementia, Foldi has received funding from the Alzheimer’s Foundation. “Professor Foldi is doing very interesting research on attention in aging and Alzheimer’s disease,” says Vila-Castelar. “Unfortunately, there’s not a great treatment or cure at this point.”

The research has a personal resonance for Vila-Castelar, whose late grandmother suffered from Alzheimer’s. “That opened my eyes,” she says. Her pursuit of neuropsychology also appeals on an intellectual level. “I absolutely love the subject,” she declares.

Vila-Castelar, who currently lives within walking distance of the Queens College campus in Flushing, arrived at QC in the fall of 2012 when she began her PhD studies. Her current project with Professor Foldi investigates ways to measure efficacy of the drug Aricept, one of the treatments currently available for patients with Alzheimer’s disease. Besides conducting research, Vila-Castelar also teaches introductory statistics to Queens College undergraduates.

After receiving her PhD, Vila-Castelar may pursue her career the United States or in Spain. In the meantime, she is looking forward to the awards ceremony. “It’s very exciting,” she says.

Queens College of the City University of New York enjoys a national reputation for its liberal arts and sciences and pre-professional programs. With its graduate and undergraduate degrees, honors programs, and research and internship opportunities, the college helps its over 20,000 students realize their potential in countless ways, assisted by an accessible, award-winning faculty.

Located on a beautiful, 80-acre campus in Flushing, the college was cited this year in the Princeton Review as one of the nation’s 150 “Best Value” colleges, thanks to its outstanding academics, generous financial aid packages, and relatively low costs. In 2013, Washington Monthly ranked QC #1 among “Master’s Universities” as a Best-Bang-for-the-Buck college and #2 nationwide among only 349 colleges that do the best job of helping non-wealthy students attain marketable degrees at affordable prices.