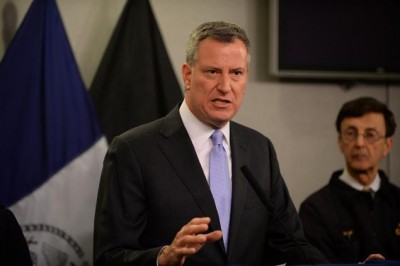 Is Mayor Bill de Blasio trying to help New York City school children or is he trying to actually harm them? Well, according to recent magazines, newspapers, and news programs it appears so.

From Fox News to MSNBC or the Wall Street Journal to the New York Post, the new Mayor of New York is being accused of beginning a campaign to harm and destroy the future of the city’s poor minority children by tampering with their education.

However, these reports may all be a ploy in a bid to tarnish the city’s newest mayor.

“The big business marketing campaign would have us believe that black children are now being kicked out of charter schools, and being mistreated because of de Blasio,” said Ebro Darden, one of the hosts of a radio show on Hot 97, “Don’t believe the hype.”

Recently there has been a public outcry against Mayor de Blasio from those involved with Charter Schools. Charter schools were built as an alternative to the education offered by public schools. And some who support these schools are claiming that the mayor is attacking charter schools due to his recent negating of an approval deal arranged before he took office.

Back while running for Mayor, de Blasio promised to slow down the development of new charter and would begin to charge rent on ones that were able to pay rent for occupying space of current schools. This plan appeared to be the first of shots fired by the mayor, or at least viewed as such by those who support and run charter schools.

The second round of fired shots would come in de Blasio’s decision about co-locations that would allow the insertion of charter schools.

To those who may not know what a co-location is, co-locations occurs when a new school that is inserted into an existing public school. What this means is that one school building will have two different schools, however they share similar facilities like a cafeteria, library, and playground.

In order to make room for a new school within a pre-existing school the latter would have to give up such rooms belonging to art or music or any other class that is not designated an “active classroom” to make room. In addition to the removal of arts programs, co-locations create an environment of over-crowding for students which leaves teachers, staff, and students bumping elbows trying to have some space.

But de Blasio’s decision not to fully compel with the deal isn’t as bad as it sounds. In fact, he appears to have been trying to appease both charter and public schools.

However, his efforts weren’t acknowledged.

And of the once 45 approved co-locations, there were a total of 17 charter schools that applied but only 14 were approved. The updated decision was eventually decided upon by de Blasio’s administration which also including the new Chancellor of New York City Schools, Carmen Fariña.

And it seems to be that because of this changing of how many schools were approved that set off those within the charter system to cry out against the city’s new mayor. One such individual crying out against de Blasio is Eva Moskowitz.

Founder of Success Academy, one of the largest charter schools, Moskowitz has appeared on various news programs describing de Blasio’s actions against charter schools as if he was abandoning and cutting off students from attaining a valuable education provided by the charter system.

A recent New York Post article stated that de Blasio had declared war on charter schools, and actions by Moskowitz drew attention from Governor Andrew Cuomo who added his two cents into the “battle”.

“We are here today to tell you that we stand with you…You are not alone. We will save charter schools,” said Governor Cuomo, the statement was made outside of a rally held in Albany.

The rally was held early in March, and was organized Moskowitz who closed 22 Success Academy schools in order to ferry students and parents of the school to attend the rally aimed against de Blasio. The purpose of the rally address de Blasio failing to adhere to the agreement of 17 charter schools.

And because de Blasio has failed to acknowledge the agreement, Moskowitz and other charter school supporters have filed a federal civil-rights lawsuit—three actually—against the mayor to overturn his decision hoping to obtain the 17 schools rather than the 14.

However, the issue with charter schools appears much deeper than merely providing education to children. It seems that de Blasio was not the supporters mayor of choice, and with Bloomberg no longer being in office they would not be awarded the same privileges once offered to them.

“We’re not going to favor them the way the Bloomberg administration did,” said de Blasio, commenting on the special treatment charter schools appeared to receive under Bloomberg.

Some argue that doing out of the old approval was a blatant display of de Blasio showing his disapproval of Moskowitz, due to three of the proposed then denied charters school were for the Success Academy.

Charter schools do benefit some, and have system in place that offers an education that may be different that the one offered in public schools. However, there are some issues with charter schools. For example, there is an undertone philosophy of charter schools that promotes the idea of a merit system.

According to some charter schools are viewed as to having a philosophy that schools that have high scores should be awarded whole schools that do not should either punish or closed down. The institution of charter schools may possess an idea that it is providing a better education to all children. But in the end, it really isn’t.

Currently, charter schools are said to disallow enrollment of students who may have profound educational disabilities and whose first language is not English. With this blockage it negates the realm of fairness in comparison to both public schools and offering of similar education to all students.

It’s providing an education to only a selective view. The selective few appear to be those show no signs of learning disabilities which “ensure” high testing and those who can afford it with only a few given special scholarships due to their grades.

Whether de Blasio dislikes Moskowitz or the feelings are mutual, the overall importance that appears to be ignored in this smear campaign and debate are the children involved.

It appears de Blasio is trying to insert an education system that will benefit all children of the city, meanwhile Moskowitz is trying to protect the interest of the students already in charter schools and who can one day enroll.

But why draw a line in the sand?

Rather than argue why not come together to combat the entire educational system which isn’t entirely perfect in the city? In the state? In the entire country maybe?

Much like colleges, charter schools and public schools seem to be receiving the same classification as Private Schools versus Public Schools. While the education value of the former may be more substantial, at a cost, it shouldn’t negate nor diminish the work of the students and the environment of the latter.

By pulling in resources, and ignoring ones’ own political and pocket interests, why not focus on the overall picture—the education of our children. By doing away with the pushing force of a meritocracy, maybe there can be a focused effort to create an new educational system that grants children a fully enriched education.