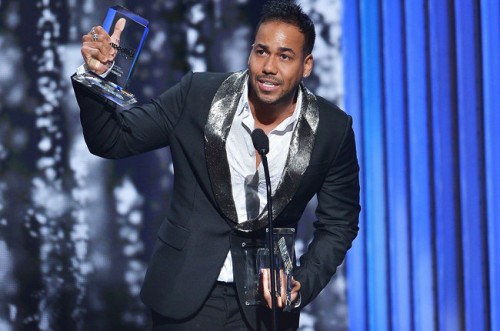 The 2015 Latin Billboard Awards had big winners and big tributes last night at the Bank United Center in Miami, Florida. Romeo was the big winner as the artist of the year garnered ten trophies with Enrique Iglesias a close second with eight. We saw a Jennifer Lopez tribute to Selena which was well received. There were also great performance combinations of elite talent last night.

Romeo and the Bachata genre is red hot in the past few years. It was confirmed last night and as he sat on his throne during his performance it was quite apparent how far he has come in his solo career. Romeo was recognized in his title wins in the areas of songwriter, producer, as well as artist. His album was listed at the top as well. Among the artists he teamed up in projects recently he especially pointed out Marc Anthony.

“I had the great privilege of recording with a man I admire so much. More than an artist that I admire, he is like a brother to me. Thank you, Marc,”

Enrique, who owned the Latin pop, digital, streaming, and airplay among others was in quite an appreciative mood as “Bailando” which stood at #1 for 41 weeks on the Latin Hot charts collected a lot of hardware.

“I want to thank my fans for their support and love all these years,”

he said, holding his awards tightly.

Selena, the Tejano singer who was killed twenty years ago, was honored by the woman who benefited greatly from playing her in the film “Selena” jump starting her career, Jennifer Lopez. She was joined by her family band, Los Dinos, including Selena widow, Chris Perez. Lopez does not deny the impact on her those many years ago.

Colombian Urban artist J Balvin left with three awards including “New Artist of the Year.” Along with Nicky Jam performance which marked his comeback into the spotlight and Wisin two wins, its obvious that Latin Urban music is still flourishing and evolving.

“It is a new era for urban music. Reggaeton is getting bigger than ever.” Balvin mentioned in his acceptance speech.

The tributes continued as Jenni Rivera won posthumous awards. Carlos Santana was given the “Spirit of Hope Award” award presented by Juanes who performed with him. He urged everyone to get in the spirit to do good things.

“I invite all of you to change the world with your own light,”

“May the heavens open up and the angels bless each and every one with a deep awareness of your own light.”

Also honored with the Billboard’s Lifetime Achievement Award was the iconic Brazilian artist, Roberto Carlos, which was presented by Marc Anthony, a winner this evening as well. With these words Anthony summarized Carlos

“Tonight, this honor is given to a man with an admirable and moving voice, a true master whose talent has left forever a mark on the world of music and in our hearts.”

The performances were a highlight with J-Lo tribute, Romeo, Marc Anthony with Gente de Zona doing their thing and a special triple dose with Luis Fonsi, AfroJack, and Ne-Yo. Another three way set drove everyone from their seats was “Nota de Amor” with Wisin, Daddy Yankee, and Carlos Vives sharing the stage. Natalia Jimenez, crowned and all, was named “female artist of the year.” Ana Gabriel and Lucero also sang from a tribute album they worked on together.

The one moment of reflection through all the festivities was for the nation of Nepal, which is still recovering from the natural disaster that has taken over 6,000 lives.

“This is indeed a night of celebration, however we could not fail to mention the devastating earthquake that shook Nepal,”

“Everyone can help remake this nation, donating to the International Red Cross with a click at www.redcross.org.”

A SOCCER BALL GROWS IN BROOKLYN
Why the Latino Presidential Candidates may not get the Latino vote?
Translate »
%d bloggers like this: