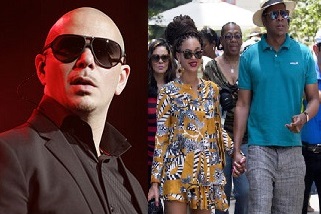 Pitbull released his own freestyle of Jay-Z’s “Open Letter”, which addressed the heavy criticism the couple received for traveling to Pitbull’s native Cuba which the U.S. enforces strong economic sanctions. An investigation was even reported into whether Jay and Beyonce had proper travel clearance U.S. Treasury officials later confirmed that the trip was licensed as an educational exchange. In his new freestyle, Pitbull has offered his support to the couple who celebrated their fifth wedding anniversary on their recent trip.

Jay fired back last week with a new song titled “Open Letter” with rhymes such as “Boy from the hood, I got White House clearance… Politicians never did s— for me except lie to me, distort history… They wanna give me jail time and a fine. Fine, let me commit a real crime.”

Pitbull talks about Cuba-U.S. relations, Cuban politics and made reference to the Mariel boatlift, which brought many Cuban immigrants to the USA in 1980, and the 1983 film Scarface, whose opening scenes showed footage from the event. He also references Elian Gonzalez, the Bay of Pigs invasion and the Cuban Missile Crisis. “Born in Miami, right on time/ Scarface, El Mariel Cuban crime.” He goes on to say “It’s the freedom that we ride for/ It’s the freedom that we die for/ C-U-B-A/ Hope to see you free one day.” He specifically addresses the Jay and Bey in his last verse: “Question of the night/ Would they have messed with Mr. Carter if he was white?/Happy fifth-year anniversary, Jay and B, don’t worry it’s on me.”

What do you think about Pitbull’s freestyle?