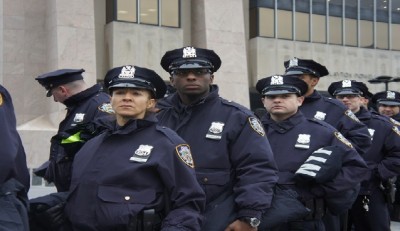 It was announced four days ago that one of the highest ranking positions to be held in the New York City Police Department’s will no longer be held by a Latino. After 44 years of service within the NYPD, First Deputy Police Commissioner Rafael Piñeiro will be retiring come the end of October and has some Latinos within both the NYPD and community itself worried.

“Asking Piñeiro to step down during Hispanic Heritage Month is insensitive and disrespectful to the Latino community and to our almost 10,000 Latino police officers,” said one police officer regarding Piñeiro’s forced retirement.

While there is current tension between some Latino and Black New Yorkers and the NYPD, there appears to be a ripple effect occurring within the department itself. There are some Latinos within the NYPD who believe this summer’s controversially police-death of Staten Islander Eric Garner may have something to do with the recent decision to have Piñeiro step down.

NYPD officers and supporters of Piñeiro are citing that the reason for the 65-year-old’s retirement may be due in part to the increased pressure felt from the Black community within the city regarding both Garner’s death at the hands of law enforcement and a lack of Black police officers within the department itself. These suspicions are also increased by Piñeiro’s replacement.

Rumors within the department are circulating that the current Chief of Department Philip Banks III will fill Piñeiro’s position. Banks is currently in charge of supervising police officer’s patrols and specialty units. In 2013, Banks retold how as a college student he himself was a victim of stop-and-frisk because of the color of his skin yet finds that when the policy is done correctly it is an effective tool for the department.

According to one source within the department regarding the current climate of its police officers an officer stated how, “Right now, the power is in the hands of the African-Americans, and they are prepping Banks for that post.”

With Piñeiro’s retirement and still yet-to-be named replacement, there are Several Latino council members who are swearing to keep a close eye on what becomes of the diversity within the NYPD. According to Council Members Carlos Menchaca (D-Brooklyn), Antonio Reynoso (D-Brooklyn), Ydanis Rodríguez (D-Manhattan), and Ritchie Torres (D-Bronx) they have responded to Piñeiro departure stating they will see what becomes of the diversity within the police department.

“Commissioner Piñeiro’s resignation is worrisome, especially after the contentious summer we have experienced between the police and the Latino community,” said Menchaca. “His presence in that agency was fundamental to guarantee cultural sensitivity.”

Both Menchaca and Reynoso have asked that Piñeiro’s replacement be of Latino descent.

Although the retirement of Piñeiro does see a Latino losing a high position within the NYPD, there is still a Latino presence. The next highest-ranking Latino within the NYPD is Carlos Gómez who is of Cuban descent. Gómez is the Chief of Housing and oversees the security within all New York City Housing Authority buildings.

However, there is growing concerns regarding the NYPD not being a place where Latinos can attain high-ranking positions thus leaving many within the community feeling unheard.

When addressing the recent concern over the lacking presence of Latinos who sit in high-ranking positions, City Council Speaker Melissa Mark-Viverito has said she too is concerned about the lack of diversity within the NYPD.

“Let’s wait and see what this administration will do about this. We must continue to put pressure on them,” said Mark-Viverito. “The Bloomberg administration did not attend to these issues, and this is why we now have this problem.”

While Bloomberg should not be avoided regarding the racial tensions between police officers and civilians—considering his administration gladly and publically supported the stop-and-frisk policy—passing the blame regarding an ongoing and nowhere near resolved issue does not correct things but merely ignores them.

With police officers and supporters claiming injustice regarding Piñeiro’s exit, the NYPD has come out and denied any favoritism or discrimination placed against Latinos to quell the currently tension within the city. The NYPD has used the promotions of Latinos Robert S. Martinez, Captain Roberto Rios, and Frank Vega as examples of Latinos who are rising into high-ranking positions within the department. However, these promotions are a tad dated since some of them are as old as four years ago.

According to President Dennis González of the NYPD Hispanic Society the retirement of Piñeiro is saddening especially since the society had nominated Piñeiro to Mayor Bill de Blasio during his campaign for New York City to become the NYPD Commissioner.

“We are saddened to hear that [Deputy] Commissioner Piñeiro is leaving,” said González, in a released statement regarding the retirement. He also added, “We considered that [Piñeiro] was qualified for the job.”

Back in 2003, a New York Times article revealed there was a contrasting difference regarding the presence of Blacks and Latinos graduating from the police academy and becoming New York City Police Officers. While there was a percentage of 25% Latino graduates and only 10% of Blacks showing there is a more Latino presence within the NYPD these numbers are still troublesome considering how diverse New York City is.

The reason why there is lack of representation for both Blacks and Latinos, and immigrants and so on—considering the NYPD is mostly made-up of 57% white non-Hispanics, according to this 2003 article—is become there is a large distrust ongoing today between the members of law enforcement and members of the community.

Since Mayor Michael R. Bloomberg took office there was an overall change in attitude regarding Latinos and Blacks feeling towards the NYPD especially after Rudolph W. Giuliani left office and the tragic event of 9/11. However, under Bloomberg’s administration and Commissioner Ray Kelly’s watch of the NYPD the attitude shifted yet again with the use of stop-and-risk policies.

While the force retirement of Piñeiro maybe wrong, it’s not what he has done or what he lacked to do that should be drawn into question. His removal to place someone who may be accepted because of racial similarity isn’t an answer to the current tension felt between the NYPD and some New Yorkers. In fact, such a plan seems to be doing the opposite.

The infighting among NYPD officers and council members because of a fear of destabilizing racial diversity doesn’t strengthen it, but hinders it. What should be done to stop the tension felt both within and outside the department is make the people—ALL people—of New York City feel truly protected by the NYPD by removing or changing current policies and procedures currently accepted and praised for ones that do not discriminate based on race.