MONICA PUIG IS NOW THE GOLD STANDARD FOR PUERTO RICO

MONICA PUIG IS NOW THE GOLD STANDARD FOR PUERTO RICO 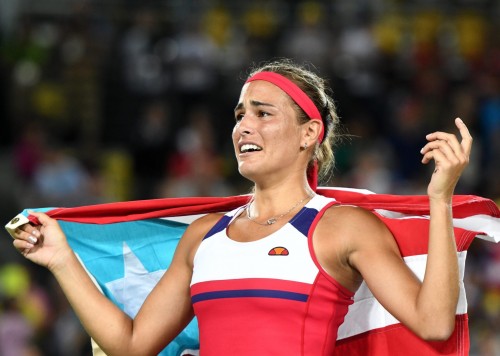 She was not the first Puerto Rican to win a gold medal or the first woman for that matter. If you look back you have quite a few athletes that are Puerto Rican by birth or descent who have won gold in the past and the current 2016 Rio Olympics. But whether through personal choice or circumstance, athletes like Gigi Fernandez, Carmelo Anthony, and even gymnastic star Laurie Hernandez, all added their tallies to the United States.

Never has the Puerto Rican national anthem been played at an Olympics. Then a 22-year old professional tennis player, who has never been ranked higher than 33 and owns only two singles tournament wins, grinded through a tough field to the top of the mountain with a finals win over Angelique Kerber to bestow the honor of Puerto Rico’s first ever gold medal in Olympic history.

“I think I united a nation and I just love where I come from,”

The reaction on the island nation was nothing short of elation. Puerto Rico, who through it’s complicated relationship with the United States has always been given the tools but never the option of using them. This victory was solely for Puerto Rico and it was both strange and empowering to see the flag raised above and “La Borinquena” playing for the first time.

Puig’s tearful reaction was as much a release for a people who are economically troubled but on this court, Monica was in control of a country’s sporting destiny and through this humble woman from Hato Rey, took their place among the relevant in Olympic lore and is forever worth more than gold to her countrymen.

Throwback: Wilmer Valderrama on the October Cover of LatinTRENDS Magazine