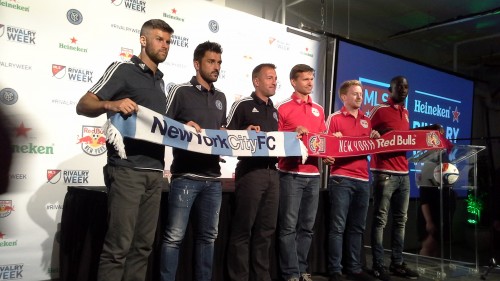 This Sunday at Yankee Stadium, as part of Heineken “Rivalry Week” we get the rematch between the New York Red Bulls and New York City Football Club.

NYCFC is the expansion team that was added to bring a soccer presence into the city center as well as provide a natural rival. Led by their Spanish Captain and former World Cup champion, David Villa, NYC is on a roll.

“At the end of the day its soccer.”

“In general, rivalries are great for soccer. Overall I am enjoying my experience.”

“We are starting to develop an identity.”

The Red Bulls are the established team. Originally the MetroStars, Red Bull took over ownership as well as the name. They are currently sitting in the middle of the standings after a rough stretch.

The first meeting between these two teams was a spirited matchup at Red Bull Park. The Red Bulls won 2-1 but the game established a measure of rival intent. NYC is a different team this time, something Head Coach Jason Kreis points out.

“They try to press their opponents in their half of the field. Thats why they won.”

“We’re a team that wants to dictate the tempo. We are much improved and we feel good about ourselves.”

Many fans of the Red Bulls see NYCFC as Mancester City lite in reference to the co-ownership of the team by Manchester City.

They also poke fun at the fact that NYC does not have their own soccer specific stadium. But Yankee Stadium is not a place to overlook, especially as its been reported that as many as 40,000 fans are expected to attend the lone meeting here of the three games scheduled between these two.