#MIKEBROWN: An Understanding of the power of Protest

#MIKEBROWN: An Understanding of the power of Protest 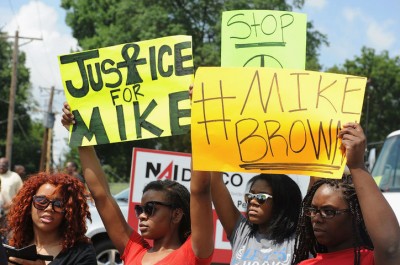 When you think of Ferguson it will not a surprise if your mind immediately goes to St. Louis, particularly to August 9th 2014 when the community became infamous after the murder of Michael Brown.

Since the start of this summer there has been an increase in racial-profiling throughout the country regarding young Black, Latino, and other people of being stopped & frisked and harassed by local law enforcement within the area they call home. The result of this trend reached its rocking point and explosion when 18-year-old Michael Brown was fatally shot six times by a white police officer named Darren Wilson.

The incident started when Brown and his friend Dorian Johnson were approached by Officer Wilson who was in his squad car. The pair were walking down the middle of the street when Officer Wilson told them to move onto the sidewalk. After an exchange of words, Brown and Officer Wilson ended up in an altercation in-which Officer Wilson was able to fire off two shots from his gun; one of the shots had hit Brown in his arm.

Now, according to Officer Wilson the following shots he fired—six shots in total—were due to Brown not obeying his orders and was continuing to move toward him. However, eye witnesses claim that Brown had his hands up when Officer Wilson open fired on the young man killing him.

Since the shooting, Ferguson has been a hotbed of unrest. Many people have protested the shooting death believing the longstanding racial tensions between the area’s Black & White community. While both peaceful and violent, Ferguson has led a serious of looking under the scope moments throughout the country and calling into question law enforcements continual abuse of power when it comes to members of color.

Largely, stop and frisk procedures as well as the unreported number of assaults at police hands have become more openly discussed and what needs to be changed within law enforcement agencies and how the institutionalize ignoring of racism should be checked. However, there’s another place that racism should be challenged: news media.

This Monday, the grand jury made its decision on whether or not Officer Wilson will be facing charges for murdering Brown. They found that he wouldn’t. And with their decision it comes as no surprise that people across the country would want to go out, go into the streets and voice their anger over the injustice that just occurred, again, in Ferguson.

Some of the protests were peaceful.

Protestors in Washington laid themselves down outside of the police headquarters there pretending to be dead. Some had handwritten notes attached to their chest which read: Black Lives Matter.

Meanwhile, in Chicago protestors gathered at City Hall while on Tuesday morning an estimated 200 members of a Black Youth Project showed their civil disobedience by staging a sit-in within the mayor’s office. The group plan to do so for a total of 28 hours.

More than 130 protests occurred Monday evening with many more being planned across the country. Protests are even being held outside of the United States to show how wrong the grand jury’s decision was and how much of an injustice has been had regarding a young man of color.

Now, whether the protests were civil or not several news media outlets—ones I will not name—loosely “reported” on the protests but merely labeled them riots or looting being acted upon by animals.

Animals, a derogatory term in itself especially with the group of people the term is being associated with. There seems to be a trend lately when it comes to reporting when people are protesting or rioting. Never have I seen acts of questionable violence being committed by groups of white civilians be anything labeled but “celebration or gathering gets out of hand” but if you were Latino and you’re protesting against your country because of the deaths of fellow youths: it’s a riot, according to the media.

The coverage of the protests in Ferguson have been have been labeled various things that all link to the notion people taking part in it are just being violent. Protesting is an act of breaking the normalcy of the day to show dissatisfaction about what is going on. The people in Ferguson have been doing just that, however when you have officers in riot gear and tanks–and the national guard getting involved–roaming the streets pushing people around furthering the anger is it not surprising some may react negative?

However, when there are moments of true riots and acts of violence for no reason they aren’t labeled as such. In Denver after a sports time lost a game back people decided to trash the streets it wasn’t called a riot; when violence broke out in New Hampshire at a Pumpkin festival because white youth wanted to have some fun they weren’t branded animals in the media; or when Joe Paterno was fired because he overlooked the sexual abuse he was aware of people set fires to police cars and yet were not deemed rioters or aggressors.

The examples used above were mostly shown to be overly populated with white civilians. Yes, the mayhem being witnessed in Ferguson is saddening. Saddening because we as a nation are still trapped within the an era some 70 years ago when it was deemed ok when a Black or Latino youth are harmed by police because they could be or are believed to be dangerous because of their skin color.

A brief lesson: when you’re feeling oppressed by a system and others share in a similar feeling you come together to protest against that system; when you protest against a system of oppression and they set their agents upon you who use violence as a weapon a riot can occur because of their violence; and when the former happens there are certain individuals who take it upon themselves to loot because it is a moment of opportunity for their own greed.

And while he may be partially true, there was something overlooked by what the president had said.

“I have no sympathy at all for destroying your own communities,” the president adds, “But for the overwhelming majority of people who just feel frustrated and pain, because they get a sense that maybe some communities aren’t treated fairly or some individuals aren’t seen as worthy as others, I understand that. And I want to work with you, and I want to move forward with you. Your president will be right there with you.”

In no way was the president condemning anyone, but wanting people to rethink the way they handle their rage and anger. Yes, to destroy your own community does not make sense. However, when you feel your community is broken internally it makes sense why some may want to set fire to a car…it’s to expose the ugly within to the outside world.

When you’re in a place where you constantly feel you’re in danger by members of an organization that’s supposed to protect you, but will condemn you and may eventually kill you because of the color of your skin it is understandable why you would want to take action. If one feels oppressed the only action is to take action, because inaction will only allow for further pain and loss.

The act of protesting doesn’t always have to result in violence. There can be sit-ins; walks or marchers; rallies or demonstrations; or getting out there and ensuring you know who is representing your community and whether they have its best interest at heart. Whether Black or White, Latino or Asian, Yellow and Green we are people and in the end that should be more important than color. But until then, we must never forget the injustice we see today so that we can act and hope they never happen again.