McDonald’s USA is giving young soccer enthusiasts the opportunity to meet their soccer heroes competing for the 2014 FIFA World Cup™ trophy in Brazil this summer and also secure a $1,000 grant for a local soccer organization of choice.

McDonald’s Player Escort sweepstakes gives 25 children ages 6 to 10 the chance to travel to Brazil and walk hand-in-hand with some of the world’s best soccer players as they take the field for a 2014 FIFA World Cup™ match. Each Player Escort, along with a parent or guardian, will embark on a four-night, five-day trip to Brazil, with the first stop in Rio de Janeiro.

The 25 McDonald’s Player Escorts will lead players onto the pitch in one of four match cities – Rio de Janeiro, Natal, Manaus or Recife. Parents or guardians can visit www.McdOneGoal.com between now and April 6 to enter the sweepstakes. 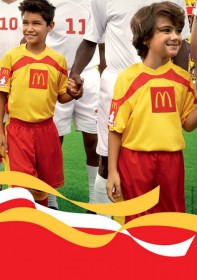 “We know how much soccer has grown in the U.S., especially among young kids – in fact, 30 percent of American households have at least one soccer player* – and many of these kids view U.S. Soccer players as role models,” said Dean Barrett, senior vice president, global relationship officer, McDonald’s Corporation. “Our Player Escort program aims to fuel kids’ passion for the game and inspire active play, while also giving twenty-five lucky U.S. winners an unforgettable experience with players.”

McDonald’s is continuing its partnership with U.S. Soccer for this year’s Player Escort program to motivate young athletes and help increase the popularity of soccer in America.

“McDonald’s has been a great partner and an active supporter of soccer at all levels for many years,” said Sunil Gualti, president, U.S. Soccer. “Through our partnership, we have strengthened the soccer community at the grassroots level by hosting youth soccer clinics and enhanced the fan experience for supporters of both the Men’s and Women’s National Teams. McDonald’s continued support and gift of grants to youth organizations will help us further our goal of growing the game in the U.S.”

Globally and locally, McDonald’s will select 1,408 children from 70 countries including Brazil to serve as Player Escorts and support their country’s players during the month-long competition, which starts June 12 and culminates with the final match on July 13. During their time in Brazil, Player Escorts and their parent or guardian will experience the thrilling atmosphere of the FIFA World Cup™ and the lively surrounding culture.