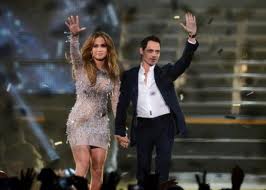 Jennifer Lopez and Marc Anthony get a little affectionate while they took the stage together in Las Vegas, according to Gossip Cop. The two announced last july that they where getting divorce and going their own ways, ending their seven year marriage. But despite their divorce, they where on stage together holding hands as they embraced the crowd at the live finale of “Q’Viva!,” their reality show. Lopez who looked beautiful as always, the two performed separately. Anthony was seen afterwards with his super model girl friend, Shannon de Lima. But J-Lo hasn’t been shy about her new relationship at all with back up dancer Casper Smart. But the former couple which are parents of four year old twins, still continue to work together after the divorce on the Univison reality project. Rumors swirl up that they could reconcile and rekindle old flames.