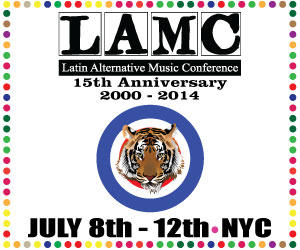 The LAMC has announced the line-ups and topics for the annual series of industry panel discussions, to be held at the LAMC’s new home, the Affinia Manhattan Hotel at 7th Avenue and 31st Street.

Registration is currently discounted to $199 at www.LatinAlternative.com, but only until July 1st. Walk-up registration will be $299.

In addition to the industry panels and networking opportunities on-site at the conference, the LAMC also offers FREE concerts at parks from Brooklyn to Harlem, plus intimate private showcases at iconic venues around the city.

On Thursday, July 10th, the LAMC will once again return to Celebrate Brooklyn at Prospect Park for a FREE show featuring Illya Kuryaki & the Valderramas, ChocQuibTown and RVSB.

On Friday, July 11th at the Gramercy Theatre, the LAMC will feature AJ Davila, Milkman, Esteman, The Wookies, Diana Fuentes and Los Macuanos.

The LAMC will close on Saturday, July 12th with another free show at Summerstage, featuring Babasónicos, Juana Molina and La Santa Cecilia.