La India-A Trendsetter and a Princess

La India-A Trendsetter and a Princess 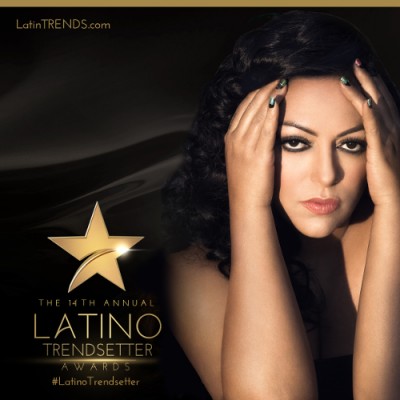 The Fourteenth Annual Latino Trendsetter Awards, a landmark celebration of excellence in enterprise, arts, entertainment, health, education and community leadership, will be held at on Tuesday, May 10th, 2016 from 6-10 P.M. at The Symphony Space Theater in New York City. The event is sponsored in part by New York Presbyterian Hospital, Inca Kola, CUNY . Media (sweepstakes) partners, La Mega 97.9 & Amor 93.1 and presented by LatinTRENDS. It will commence with a VIP red carpet reception, attended by awardees, influencers and media.The award presentation will be partially open to the public and special guest and will start at 8PM.  It will feature a musical performances by Frankie Negron , a multi-cultural dance performance featuring tango, flamenco, salsa and bachata music. Emerging urban Tropical musician, Doñé, will perform live as well.

Meet Linda Bell Viera Caballero a.ka. “La India”
Wonderful things can happen when artists put their heart, body and soul into their work.  When this is achieved, they are not simply admired for their talent, but respected as someone that lives for what they do and love.  This is the essence of India, she gives her all in each and every one of her performances and recordings. Apart from the obvious charisma and powerful vocals that distinguishes her as a well-rounded star, she is also a multifaceted artist of unquestionable Latin identity and a genuine diva. India (born Linda Bell Viera Caballero in Río Piedras, Puerto Rico), grew up in the Bronx, New York, by the age of seven she had put all shyness aside to nurture her love of the arts, training first as an opera singer and later moving on to runway modeling.

As a tribute to her beauty and free spirit, her maternal grandmother lovingly nicknamed her “India”, for her beautiful brown skin and her straight, raven hair that resembled her “taíno” ancestry. Her passion for music instantly made her into a bold, charismatic and charming soul that easily connected and thrilled audiences. She made her debut in the music business in the decade of the ‘80s, with the popular dance group TKA, one of the first Latin free style groups to take over the streets of the “Big Apple”, garnering the honor of being the first group to revolutionize the Latin beat internationally.  With this group she participated in numerous events that featured prominent mainstream headliners like Madonna, catching the eye of prominent music industry gurus who quickly discovered her outstanding potential.

Music producer “Little Louie” Vega was one of the first to approach her and introduce her to fellow producer Jellybean Benítez, who amazed by her gifted vocals decided to sign her to his own independent label distributed by Warner Brothers. Under his guidance, she released her first single: “Dancing on the Fire” –with its Spanish language version “Bailando En El Fuego”-, and later, “Lover that Rocks”, which made it to the Top 5 singles spot under the dance genre. After these jaw dropping hits, 1989 witnessed the debut of her first album, “Breaking Night”, a pop dance album with free style influences.  Everything was moving like a well-oiled machine and Linda Caballero was viewed as the “Latin Madonna”. “They wanted to change my essence and make me a part of the mainstream culture, in other words, they wanted me to be white, and that’s just not who I am. I didn’t want to be the next Madonna, I wanted to be me, and that’s what I did”, she states without regret.

She had always longed to share her roots, to embrace her culture before her audience and to portray how she felt on a stage. But she was quickly becoming a music icon and she couldn’t just throw it all away so easily.  That’s when destiny brought her to meet legendary composer and pianist Eddie Palmieri, who would become her bridge for the cross-over into Latin music. Impressed with the talented young artist, he offered her the chance of recording her first album in Spanish, giving birth to “Llegó La India vía Eddie Palmieri”, her impressive Latin music debut album in 1983. It was an absolute hit. It gave her a stronghold as a leading lady within the generally male dominated salsa genre.By 1993, she had released her second album in collaboration with prominent producer and arranger Sergio George. Titled “Dicen Que Soy”, it’s astounding sales represented for La India her first 4 times Platinum record. It also included the explosive single “Vivir lo Nuestro”, a duet with Marc Anthony, which crowned her as an international superstar. The album rendered numerous hit songs that quickly surpassed all borders, including “Nunca Voy A Olvidarte”, which captivated the top international music charts for five consecutive weeks. The astounding success of the album quickly led to important performances and to being recognized as the new shining star of tropical music.

Although already well known, her powerful voice and candid nature never failed to impress tropical music greats like Latin Jazz icon Tito Puente, who along with Celia Cruz dubbed her, “The Princess of Salsa”. “It was an honor to have caught their attention because I had always followed their music, and later on he and Celia became my mentors”, expresses the Puerto Rican artist deeply moved by her admiration and respect for these two legendary figures.Puente invited her to join him in recording what would be the history making release “Tito Puente/India Jazzin with The Count Bassie Orchestra”, an absolute collector’s piece for both their fans. The great honor of sharing the stage with the jazz icon came again in 1999, under the musical direction of Isidro Infante, in the living tribute to salsa legend Celia Cruz, which showcased on TV the performance of her duet with Cruz of the song “La Voz de la Experiencia”, written by India and Infante in honor of her musical godmother. Following this pillar in salsa music history, India has done important collaborations with renowned vocalists like Oscar De León, Gloria Estefan, Michael Stuart, Yolandita Monge, José Feliciano, Tito “El Bambino” and George Benson, the latter worked on the memorable project “Nuyorican Soul”.

Two of her albums, both produced and directed by Isidro Infante, “Sobre el Fuego” (1997) and “Sola” (2000), were nominated for the Grammy. “Sobre el Fuego”, became an anthem for India, opening a new facet for the singer-songwriter who spoke on behalf of numerous social endeavors, providing support through her music to battered and discriminated women, the fight against breast cancer, child abuse, patients suffering from HIV, and The Diabetes Foundation, among others.  Raising her voice in support of the LGTB community (Lesbians, Gays, Transsexuals and Bisexuals) and calling for an end to the discrimination affecting this group, as well as supporting  same sex marriages was very significant for the artist, who was honored in 2007 with the prestigious GLAAD award, (Gay and Lesbian Alliance Against Defamation) for her efforts.“To be able to contribute to social causes related to children, youths or minorities that suffer and are discriminated is a social obligation and a blessing. But more than that, it is a very important part of my life”, she confirms. On its behalf, “Sola”, in addition to receiving the Latin Billboard award for “Best Tropical/Salsa Album of the Year”, was also one of her most highly acclaimed releases, partly due to her tribute to the late Cuban diva La Lupe with songs like “Qué te pedí” and “Si vuelves tú”.

Her next album was “Latin Songbird: Mi Alma y Corazón”, released in 2003, following a three year absence from the music industry, it featured important contemporary Latin music producers like Emilio Estefan Jr., K.C. Porter, Isidro Infante and José Gazmey. This album would reveal her great versatility as a writer. One of its songs, “Sedúceme”, became an absolute hit in both its Tropical and Pop ballad versions, reaching the coveted #1 spot for Billboard Magazine’s Hot Latín Tracks and garnering countless nominations and awards. Despite her multiple accolades, Linda Caballero never left her dance roots behind, always recording upbeat dance versions of all her English hits including “Seduce Me Now” and “Just For One Night”. She would do this again in 2009 with the new remix version of her 80’s hit “I Can’t Get No Sleep” and in her recent collaboration with GRAMMY award winning DJ Roger Sanchez for the single “I Can´t Live Without Music”.

Recently, the hot track “The Transalatins Feat: India” became a hit song, taking European and Canadian dance clubs by storm,  while India followed with an intensive tour schedule that took her to top stages throughout Italy, France, Switzerland, Ibiza, Hong Kong and Tenerife. At 37, she received one of the top honors of her young life. In recognition for her tireless efforts and multiple accolades, the authorities of her hometown, the Bronx, New York dedicated a street in her name in front of the local county court house.  Her name is also prominent in one of the stars at the Celia Cruz Park in New Jersey, next to the star bearing the name of the incomparable “Salsa Queen” herself.

With a history of over 30 years, India shows herself as a “totally renewed” artist with a new magnificent album titled “Intensamente Con Canciones de Juan Gabriel”, which went on sale digitally as well as physically, on July 10th of 2015, under the record label of Top Stop Music owned by Sergio George and Gregory Elías.This production is her new jewel, where it highlights songs from the Mexican star Juan Gabriel, with whom she has also undertaken an extensive concert tour titled “Noa, Noa”. Since its launch, the album has grabbed the world’s attention so much that it gave her the first place in the Radio’s Tropical Chart from Billboard’s magazine, thanks to the impact of her first single titled “Ahora que te vas”. “It has been a blessing. Sergio and I have been working together for a very long time and we both have shared many experiences in the studio. I love working with him. I told him that I wanted to sing all the songs I had recorded with Juan Gabriel and he said ‘you can count on it’”.“It is a great personal joy and satisfaction for me to be able to work once again, one on one, with someone as dedicated and professional as Sergio, I am confident, that as always, this will be an unbeatable team”, the artist points out. With this new release, India will continue doing what she does best: singing from the heart, sending out positive energy with her passionate and powerful voice while she continues to proudly make her way into the hearts of her fans. India, now also known as the new “Queen of Latin Soul”, is an intricate part of international Latin music history with a brilliant legacy that will forever be a defining element for her generation and for those to come.

About LatinTRENDS
LatinTRENDS is a multi-media and marketing company that connects with the acculturated Hispanic community via its flagship monthly print magazine, weekly e-newsletter, daily content on LatinTRENDS.com and events. The brand’s content is bi-lingual, covering the latest trends in entertainment, travel, technology, wellness, business and cuisine, including featured Hispanic professionals & entrepreneurs.  Content also covers exclusive interviews with celebrities and innovative people that influence trends in pop culture.