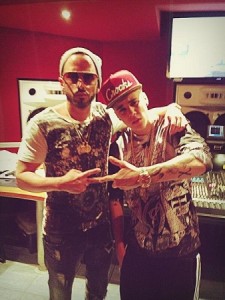 Yandel took to Twitter and Instagram Wednesday to share photos of him posing with pop star Justin Bieber at “Hit Factory” studios, where Yandel is working on the finishing touches of his new album. Yandel has been in the studio in Miami working on his second solo album “La Leyenda” and now everyone is speculating whether the two superstars are collaborating.

A source close to the Puerto Rican artist confirmed he and Justin Bieber spent some time working together, recording and singing some tunes. It’s still not clear a true collaboration is actually in the works. We will just have to wait and see!