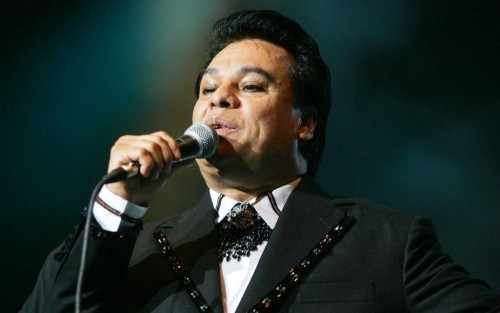 What can you say about Alberto Aquilera Valadez? Not much as the vacant looks on your faces indicate. But if I mentioned the name Juan Gabriel, its brings to mind a legend in the music business. At the World’s Most Famous Arena last night, Gabriel, stopped by on his Bienvenido Al Noa Noa Gira tour, and proved that at 65, Juan can still make the masses swoon.

The 45 year veteran singer unloaded a packed army of talent to go along with his distinctive voice that marked him consistently one of the best performers alive. The pride of promoter Cardenas Marketing Network, this tour has quite an ambitious streak.

Gabriel is at his flirtatious best, dressed first in sharp black three piece suit which contrasted well with his line of white clad mariachis, who blasted out the traditional Mexican sounds in unision and displayed some sensational solos.

Gabriel was backed by an orchestra and dancers who smartly backed a couple of songs with sharp choreography. In every set Gabriel worked in and around his performers as the crowd passionately repeated the lines of all his songs.

A tearful moment this evening was his tribute to the late Rocio Durcul, as her image was displayed on the big screen on the stage background. The multi nominated Grammy artist sweated, marched, posed, and sang with the same energy and grit, laced with his playful side, made for a classic Juan Gabriel night of entertainment with a modern additive. Not bad for a six decade man.

¡Pa gozar! Your inside scoop on Miami’s Latin music clubs

WHAT MY FAMILY TAUGHT ME ABOUT MY PUERTO RICAN ROOTS & PRIDE

1930s Massive Deportation of Mexican-Americans. Could History Repeat itself?