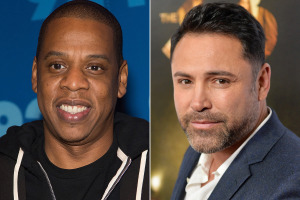 The upcoming fight for the WBC Middleweight championship between champion Miguel Cotto and Canelo Alvarez will have high stakes. Not the least of which are two powerful men who have put their money where their promotional mouths are.

Jay-Z, music mogul and creator of Roc Nation Sports, who has Cotto under his umbrella of talent, and Oscar De La Hoya, former multiple time Boxing World champion and CEO of Golden Boy Promotions , who has Canelo under his promotional flag, have made a bet concerning the November 21st fight taking place at Mandalay Bay Events Center in Las Vegas.

The origin of the wager came out of visits to their respective boxer’s camps as they both came out confidently boasting about their fighter’s odds of winning this contest.

What came out of it was a $100,000 bet with the winner’s earnings going to their specific philanthropist endeavors. Should Cotto win, then Jay-Z’s Shawn Carter Foundation will receive Oscar’s donation. If Canelo comes out on top, then Oscar’s White Memorial Center’s cancer unit will benefit from a Jay-Z donation.

So not only will there be interest in the winner, who goes on to fight Gennady Golovkin, but in the betting outcome as well for these two most successful of entertainment businessmen.

¡Pa gozar! Your inside scoop on Miami’s Latin music clubs

WHAT MY FAMILY TAUGHT ME ABOUT MY PUERTO RICAN ROOTS & PRIDE

1930s Massive Deportation of Mexican-Americans. Could History Repeat itself?