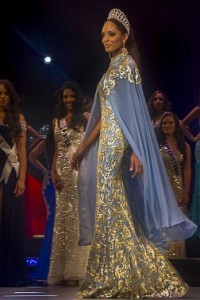 Written By: Clara Galvano
Photos By: Honey Bunches of Oats

I walked into Manhattan’s Symphony Space Theatre looking for Miss Republica Dominicana US 2012, Chantel Martinez, and found 32 beautiful ladies who were there for their final rehearsal before leaving for the Dominican Republic to vie for the 2013 title. The winner will then represent Dominicans in the U.S. as an official contestant in the Miss Dominican Republic Universe 2014 pageant. Next stop for the winner of that certamen? Miss Universe 2014! Good luck, ladies!

Miss Martinez, who had recently returned from DR, placed 5th. Yes, she was upset that she didn’t win, but candid about why she feels she lost. When the juror asked her the final important question in Spanish, she blanked out. Could not come up with a coherent response. Martinez, who was born in NYC and attended local Washington schools, thinks in English. In order to improve, she is taking Spanish lessons because, she is going to try for the title again. 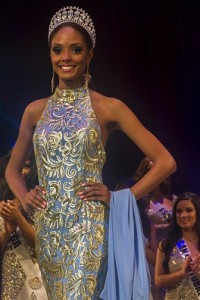 Martinez can do it. She is tall, beautiful and authentic. When she began her foray into pageants, it was because she was interested in modeling and thought that being in the pageant spotlight would help her land some clients. She thought that pageants were superficial – that women were chosen purely because of their beauty. She has since found out that this is not true. The women all have their individual reasons for competing, but become friends during the time they have together. As a matter or fact, the theme for this pageant is Beyond Beauty. Honey Bunches of Oats, the returning sponsor, is “honored to represent Latinas to redefine and explore the positive role of today’s generation in society while sharing their dreams, accomplishments and real stories in their quest for success.”

Having had no background in pageants, Martinez decided to try and is very proud of how far she has come. She sees herself as a role model. “As a matter of fact, five of the girls in this contest went to school with me and are in the contest because of me!” she says. She is giving hope to younger girls who dream of one day representing the Dominican Republic in the Miss Universe contest…and winning! 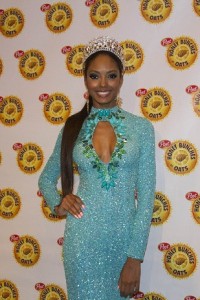 With such a gorgeous body, I asked Martinez, what she does to stay in shape. What type of exercise does she engage in? “Nothing specific, she says. I just walk a lot”. But she smiles and tells me that she had her “boobs” done. Is this a secret? I ask. No, she tells me, that information is out there. “I didn’t want anyone coming back to me thinking that I have something to hide. I think plastic surgery is good for whoever needs it.” “Para bien” she says. “If someone is unhappy with their nose, lips of whatever, and it’s going to make them depressed, it’s better to have it done and not succumb to feeling bad about yourself. That is much worse.”

Although she is taking a semester off, Martinez is studying at the John Jay College of Criminal Justice, the City University of New York. Why? Martinez wants to be a detective! She doesn’t mind dead bodies or blood..she wants to fight crime and make New York a safer place to live.

Martinez admires First Lady Michelle Obama for the work she is doing with children’s health. During her reign as Miss Dominican Republic U.S. 2012, she has worked closely with the DREAM project, a foundation dedicated to providing education and development programs for children in the Dominican Republic. For more information go to www.dominicandream.org.

I just had to ask one last question. What if a date knocked on your door and showed up with his pants down his back, as so many young Latino men are doing lately? Martinez says that she doesn’t know why young ladies go out with guys “undressed” like that. “Don’t they have any pride” she asks? So what would she do, I ask. “You need a belt, is what I would say. Go and get a belt and don’t come back without one.”