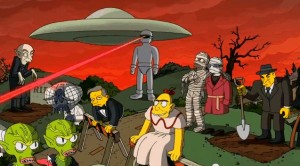 To honor the upcoming Halloween celebration, writer and director of Pan’s Labyrinth, Hellboy, and Pacific Rim Guillermo Del Toro joins up with one television show that always celebrates. Taking his talents in horror and science fiction, Del Toro designed a 2 minute and 45 second opening sequence to FOX’s The Simpsons. Known for his fantasy-slashed-supernatural intermixed with science fiction mindframe, Del Toro planned the opening sequence to the traditional Halloween episode of The Simpsons’ Treehouse of Horror XXIV.

Abandoning the couch gag routine, but sticking the usual opening somewhat Del Toro’s run on last night’s episode and contained some guest appearance of traditional horror movie characters and their masterful creators. From Alfred Hitchcock and Stephen King, Del Toro dove into the horror cannon to bring back some horror classics.

“I really wanted to land the connections between the [show’s] set pieces and the titles and some of the most iconic horror movies, and intersperse them with some of my stuff in there for pure joy,” said Del Toro, in an interview with Entertainment Weekly.

The horror writer and director wanted the opening to be delightfully graphic with the intention of being scary. Del Toro was so happy with the finale product he has stated that he would love to work with the FOX comedy again in the future.

Now in its 25th season, The Simpsons have continued a tradition in presenting the Treehouse of Horror episodes annually for Halloween. The opening sequence usually begins with a dark opening sequence before telling three disconnected stories set outside normal series storylines.

There are a total of 23 Treehouse of Horror that have aired to date and have been nominated several times for Primetime Emmy Awards in the past. So Del Toro may just find his opening touch earning him an emmy.

The Independent Factor: Does Adolfo Carrión’s candidacy strengthen or weaken the power of the Latino vote?
What does the Shutdown of our Government mean?
Translate »