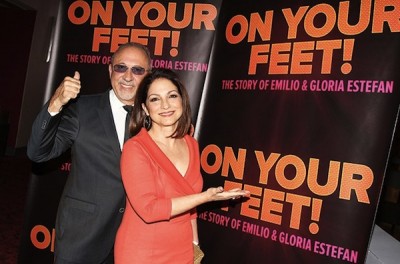 Grammy Award winner, the Latin Icon, la Reina de Miami, Gloria Estefan and her husband and business partner/producer Emilio Estefan are working on a Broadway musical about their life and incredible musical career.

According to a press release, the musical, is “the story of two people who—through an unwavering dedication to one another and their pursuit of the American dream—showcased their talent, their music and their heritage to the world in a remarkable rise to global superstardom.” It will feature such hits as “Rhythm Is Gonna Get You,” “1-2-3,” “Mi Tierra,” and “Conga,” in addition to new music penned by the Estefans.

Gloria recently told the New York Daily News that pop singer Ariana Grande is top on her list of actresses to portray her in ‘On Your Feet’ the Broadway-bound musical based on Estefan’s life story.

“Ariana Grande would be somebody wonderful,” Estefan said. “I saw her when she was eight years old on a cruise ship and she had sung this song, and I literally went up to her and told her and her mom, ‘I don’t know if you plan on doing this, but this is what you need to be doing because you are an amazing singer.‘”

The Ariana Grande just released her second album, “My Everything.” She is also known for her television performances in “Sam and Cat” and “Victorious.” However with Ms.Grande’s busy schedule due to her popular demand, will she have time to do a Broadway musical, will the little-miss Diva even want to do it?

The musical, which will explore the life and music of Gloria Estefan and her husband, producer-musician-entrepreneur Emilio Estefan, will have a book by two-time Drama Desk nominee Alexander Dinelaris.

The production has also launched an international casting search, Reach Gloria (#ReachGloria), which offers performers around the world a chance to audition for all roles in the musical by submitting audition videos online at OnYourFeetMusical.com.

“Finding the right performers to tell our story on the Broadway stage is the most important step in this project,” said Gloria Estefan in a statement. “Our own journey together started in Miami, a city that has been such an inspiration to us both, and it only felt right that the city be a cornerstone of our search for the next generation of bright talent.”

Emilio Estefan added, “On Your Feet! is a piece that speaks to people of every culture around the world. We’ve seen audiences from South America to Asia, and everywhere in between, be moved by our music and we want each and every one of them to have a chance to be a part of this story and show their talent to the world.”

The musical “On Your Feet!” will be directed by Jerry Mitchell, who also directed “Kinky Boots”. The show is due to begin previews in New York at the Marquis Theatre on October 2015 after a summer stop in Chicago.

Will Jaime Camil Be The Casanova of All Latino Dads on the WB??
The Ouija Movie Sweepstakes
Translate »