Gloria Estefan on ‘Oprah’s Next Chapter’

Gloria Estefan on ‘Oprah’s Next Chapter’ 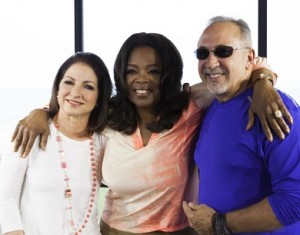 Oprah sits down for a traditional Cuban-style lunch with seven-time Grammy Award winner Gloria Estefan, the most successful Latin crossover artist of all time, at Gloria’s home in Vero Beach, Florida.

Oprah discusses Gloria’s upbringing as a Cuban exile, her iconic career and how she got the world listening to Latin music, developing some of music’s biggest stars including Ricky Martin, Jennifer Lopez, Shakira and Marc Anthony. She also shares her journey back from the bus crash in the 1990s that almost stopped her from ever performing again.

Gloria is joined by Emilio Estefan, her husband of nearly 35 years and a 19-time Grammy Award winning musician and producer; 18-year-old daughter Emily Estefan; son Nayib Estefan, his wife Lara and their one-year-old son Sasha, the Estefan’s first grandchild; and Lili Estefan, the Estefan’s niece and a television host on Univision.

Oprah’s Next Chapter with Gloria Estefan airs Sunday, August 4 at 9 p.m. ET/PT on OWN.

Watch the promo below:

Paulina Rubio Caught Urinating In The Sea By Paparazzo
The Bella Twins are “Total Divas” On E!
Translate »
%d bloggers like this: