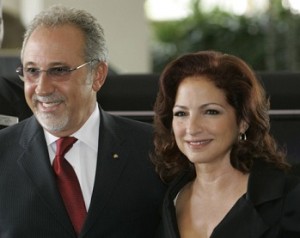 On Monday, September 16, First Lady Michelle Obama hosted one hundred thirty middle and high school students from Washington, D.C., for an educational program about Latin music held at the White House. Gloria and Emilio Estefan, among other artists were invited to attend the workshop and music special. The workshop, “Celebrando el Ritmo Latino: The History of Latin Music,”educated students about the history of Latin music as well as a PBS music special Música Latina: In Performance at the White House.

“I feel honored to have been invited by the First Lady to be part of such an inspiring event. Not only to share our Latin heritage through our music but also share our stories and pass on some bits of knowledge and hope to our future generations.” said Gloria Estefan.

This is the sixth educational workshop that the GRAMMY Museum has organized at the White House in collaboration with the In Performance at the White House concert series. The event was produced by The GRAMMY Museum and directed by leading music educator and the museum’s director, Robert Santelli. Participating students learned the origins of Latin music, the elements of the genre, the popularity of Latin music in other parts of the world and studied the many subgenres that comprise the larger Latin genre. Other special music guests in attendance include Lila Downs, Romeo Santos and Marco Antonio Solís, who will answer student questions, and perform acoustic songs.