Famous Latino Gerard Pique on his “normal family” with Shakira

Famous Latino Gerard Pique on his “normal family” with Shakira 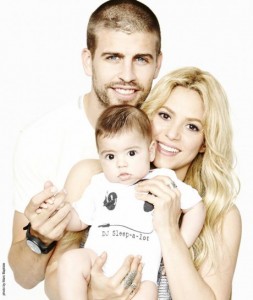 She is an international singer who has sold over 70 million albums worldwide and he is a renowned soccer star with a World Cup Title to his name, but to Latin superstars Shakira and Gerard Pique are just like every other normal family.

Apart of CNN’s Human to Hero series focusing on inspirational athletes from various sports, the FC Barcelona soccer player Gerard Pique is one of the athletes featured. During his segment highlighting his career–which has seen 19 domestic trophies including the 2010 World Cup title–Pique takes time to talk about his famous family.

Back in 2010, Pique met Columbian singer Shakira while shooting the music video for her 2010 World Cup Song entitled Waka Waka. Sparks flew on the set and just four years later the two are now parents to a 12-month-old son named Milan.

As one of the internationally popular celebrity super-couple–almost outshining the legendary David and Victoria Beckam–it seems impossible for the two to retain any sense of normalcy. However, Pique notes the two make it work.

“Maybe it seems like it’s really difficult to manage everything but we are trying to do it as naturally as we can,” explained Pique, discussing how he manages his personal life as partner and father while its out there under public surveillance.

Included in the Forbes’ 2013 list of the World’s Most Powerful Pairings, Pique and Shakira are highly sought targets for the menacing paparazzi. Constantly followed and hounded, Pique describes how he has come to deal with the nuisance of the flashing camera lens.

“It’s true sometimes we have to deal with paparazzi but you have to accept it. It’s no problem,” said Pique, disclosing that he’s accepted the attention his four year relationship with Shakira has attracted.

“We are like a normal family and we try to spend a lot of time with our son and before that, just to be a good couple—going to the cinema, going to have dinner.”

To see more of the interview with Gerard Pique check out the Human to Hero series on CNN.