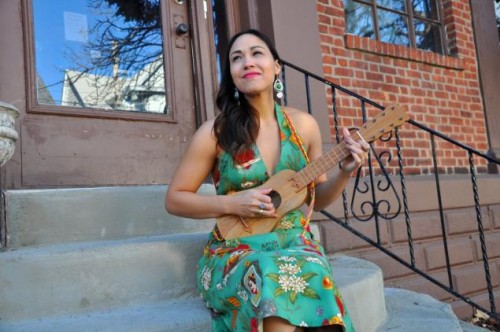 Walls separate people, bridges connect. It’s something to consider when you see people expanding their horizons and spreading positive vibes for a change. One such woman is Sonia De Los Santos. A resident of Monterrey, Mexico had a dream about coming to live in New York City. However, now after spending a decade here, life has taken her places in ways she never anticipated and as a result not only has she educated many, but learned more about herself in the process.

“I became more in touch with my heritage being here,”

“I didn’t have enough Mexican music under my belt. I learned other cultures in the process.”

For Sonia, the journey has been the theme of her life. She fit a need by Dan Zanes and as a result became part of a lengthy tour that defined her in the family music genre.

“He impacted my career in the most profound way.”

She would end up touring with him for eight years. But in reality she played for both children and adults.

“I always say I either play at ten in the morning or ten at night,”

In the process of working on her own project released last year called “Mi Viaje: De Nuevo Leon to the New York Island,” Sonia found she had much to learn about her own culture. Yet she could recall her childhood days and draw from it. She redefined herself in the process. She recognized there was still a space to fill.

“I felt that there was a need for more music in spanish for families,

“I want to give music with families to enjoy the company of each other.”

The 12 songs on the album is an effort of positivity where Sonia chooses to put her energy into despite the immigration controversy in the United States. So, its not surprising that she chose “La Golondrina” as a personal favorite.

“Its a swallow bird that overlooks landscapes from one country to another,”

“I wrote that song about my experiences as an immigrant. Far away from home but but trying to find a new one.” 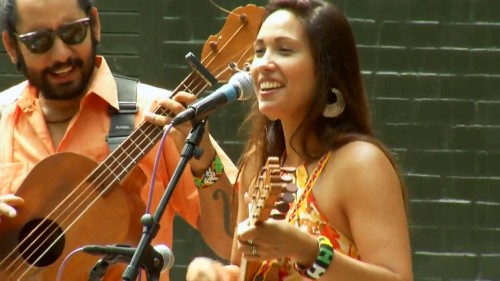 Sonia started out with dreams of acting and working in musical theatre in her hometown of Monterrey, Mexico. Dos Santos benefitted greatly from an educational value equal to what Sonia referred to as “doing three majors at once.” Her ultimate dream was living in “The Big Apple.” She brought her favorite instrument, the Jarana Jarocha, which resembles a ukelele along with a communications degree from the Institute of Technology and Superior Studies in Monterrey. She also came out of a culture that breeded music.

“Alot of great bands have come from there,”

Sonia pointed out, “Everyone speaks English being close to the border.” She also found inspiration from family get-togethers. “I had the bohemian uncle who played guitar and cousins who played at parties,” Sonia reminisced, “I memorized the songs because I wanted to be a part of that world.”

But Sonia found her path to her dreams were kept clear by her parents. Although neither were musically inclined, they never threw water on Sonia’s sandcastle. “They encouraged me to follow my dream. I could not have done this without them.”

Sonia continues to explore the world of acting in 2016 and looks to expand beyond New York City in sharing her sound. This young bird will be filming a TV show with herself among the players. De Los Santos understands whats necessary to do these things. She does not limit herself. It’s not how she does things.

“Sometimes you have to sacrifice alot to get what you want.”

When it’s easier to stay in familiar surroundings, Sonia proves that sometimes the grass is greener on the other side.