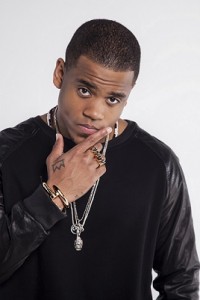 You may already recognize Tristan Wilds best known for his memorable roles as Michael Lee on HBO’s The Wire and as Dixon Wilson on the CW’s 90210. Well now he is making his musical debut as Hip-Hop/R&B Artist Mack Wilds with his new album “New York: A Love Story,” which will be released on September 30.

The native Staten Islander who is half Dominican uses his middle name, Mack as his stage name because he wants people to know where he comes from.

With 90210 ending the 24 year-old believed it was divine timing to begin his musical journey. The album is a dedication to his city of New York and was produced by longtime friend Salaam Remi. Wilds collaborates with artists such as Raekwon, Doug E Fresh and Method Man on his first LP.

The first single “Own It” which was written by him, Ne-Yo and Salaam has been getting a lot of airplay especially in New York. “It really is just a pure attitude song. That feeling that resonates within us all that no matter what you’re doing you want to own it,” says Wilds.

The singer/songwriter identifies with both acting and singing but that wasn’t always the case. “Its gotten to the point where music and acting is just another facet of my creativity,” he explains.

When asked what it was like growing up with a Dominican mom Wilds admits it was crazy but she made him the man he is today. About being Latino and staying in touch with his roots he states “I can’t get away from it. I go to Washington heights to see my cousin or even go to the Bronx to see my nana. I’m surrounded by it, its just my life.”