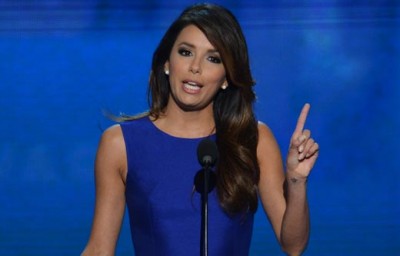 The upcoming elections once again have moved its spotlight on an actress who is very active in the political field going back to 1992 and her work with the Clinton campaign, going door to door. She is a desperate housewife, well on television. At 39, Eva Longoria continues to be outspoken on the issues of Latinos and elections.

In response to the apathy of Latino voters who feel that no voting is a message within itself she is quick to disagree.

She has impressed Senators such as Democrat of New Jersey, Cory Booker. As a Democrat herself she shares a more people oriented view. Booker sees her abilities as a strategist, along with knowledge of the issues as the key.

“She is willing to sacrifice popularity for her larger sense of purpose.” Booker explained.

Speaking at a summit for women on behalf of the Obama campaign started the talk about the US Senate not having a Latina in such a position. Coming from Texas, politics is old hat. But Eva, who claims that most of her time is devoted to her Eva Longoria Foundation, whose purpose is to assist Latinas through educational programs, is already doing the type of work that would make her attractive for office even though Eva says different.

Would I ever run for something?” she wrote in The Hollywood Reporter in 2012. “God, no. I have more power as a citizen. ”

Once you become a politician, your hands are tied. I’d rather have a voice.”

What do you as a Latino voter in 2014 think? Is Eva Longoria more valuable politically in office or grassroots?

CENIA PAREDES A SUCCESSFUL DOMINICAN DESIGNER IN THE WORLD OF FASHION

William Levy on Cover of LatinTRENDS
Failing to Pull the Latino Vote: Democrats could face losses this upcoming Election
Translate »