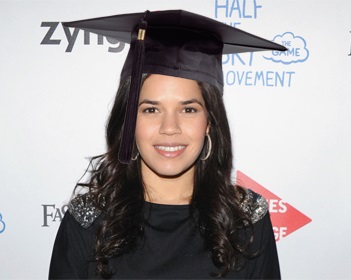 Eva Longoria graduated Wednesday with a master’s degree in Chicano studies from Cal State Northridge. The “Desperate Housewives” actress began her studies while on set three years ago.

The 38-year-old petite beauty titled her thesis “Success STEMS From Diversity: The Value of Latinas in STEM Careers.” “STEM” is an acronym for science, technology, engineering and math. She also holds a Bachelor of Science degree in kinesiology from Texas A&M University.

Longoria couldn’t hold in the excitement and tweeted “Big day today!!! Very excited to graduate for my Master’s degree in Chicano Studies! You’re never too old or too busy to continue your education!”

America Ferrera also graduated with a Bachelor’s degree ten years after starting college. The Ugly Betty actress graduated from the University of Southern California, 10 years after beginning her International Relations course. She took a leave of absence after she was offered the starring role in the ABC show that garnered her a Golden Globe and Emmy award.

The 29-year-old graduate also tweeted her accomplishment saying “At last it’s happening! It’s taken me 10 years, but I feel great.”