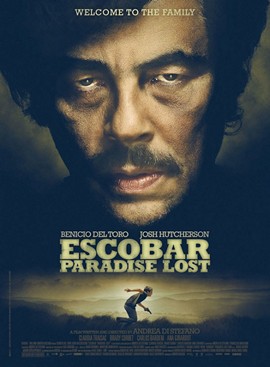 Embracing dark roles is nothing new for Puerto Rican actor Benicio del Toro, however for his latest role in Escobar: Paradise Lost, as the Colombian drug lord Pablo Escobar Del Toro found the role and the person to be quite interesting considering Escobar was both a dangerous, violent man while also known for his familial values and community aid.

At the height of the Colombian drug trade of the late 80s & early 90s, Escobar was one of the most powerful drug lords who overlooked a cold and bloody empire. His notoriety as drug kingpin has resulted in numerous films about Escobar, particularly wanting to expose how one man took his drug trafficking business onto a larger, global scale and building it into a strong empire around himself until his death in 1993.

And in the latest incarnation, Del Toro will get to portray the drug lord in a new take of his rise to power. Out in theaters now, Escobar: Paradise Lost we get to see the power of Escobar through the eyes of Nick (played by Hunger Games star Hutcherson), a young surfer arrives in Colombia to open up a surf school and by chance meets Escobar through his niece and tries to work his way up to the drug lord’s good side.

According to Toro, Escobar “did a lot of evil, you know, and along the way corrupted a whole system. He brought the government of Colombia to its knees for his own benefit.”

“He was a family man, a churchgoing man, or a faith man,” said Del Toro, discussing the film’s approach into showing the protector and paternal side of Escobar, “He helped a lot of people in need like bringing soccer fields and things that a lot of Latin Americans do know; he brought in clinics and built neighborhoods but at the same time he was involved in a very bad business..”

According to those who provided accounts on him, Escobar was quite a complex character. Known for being truly charming and charismatic at one moment, some have said the very next moment Escobar could become the most feared and terrifying psychopath there was.

It is this duality of Escobar that attracted Del Toro to the role.

“He became almost like a character out of a fictionalized comic book,” added Del Toro, “Truth (here) is even stranger than fiction.”