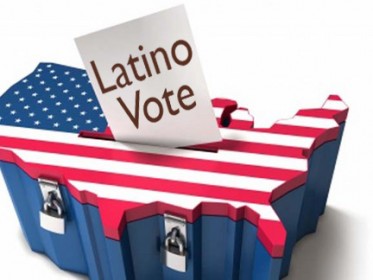 As the immigration debate in America becomes far more intense—particularly the standstill that’s going on in Washington regarding immigration reform—where do Latinos stand in-regards to their political alliance?

Are Latinos preferring to side with Democrats or Republicans during this recent intense political climate?

In recent reports released, it appears that while Latinos aided in seeing President Obama receive another term as president the group is starting to fall out of love with the president when it comes to his job approval.

Back in December, a report was released that showed how in 2012 the job approval rating for President Obama stood at about 75% but it had fallen to 54% in November of 2013.

“Hispanics’ approval has dropped 23 points over the last 12 months, the most among major subgroups, and nearly twice the national average. His approval rating also showed above-average declines among low-income Americans, nonwhites, moderates, and moderates who identify with or lean toward the Democratic Party,” said Jeffrey M. Jones, in his article, “Obama Approval Down Most Among Hispanics in Past Year” for Gallop Politics.

While Latinos may be losing their support of President Obama that does not mean they are losing faith in the Democratic party and opting to support Republicans or the GOP.

When it comes to their approval of Republicans, only 23% of Latinos approve of the party’s effort in Washington. Meanwhile, 68% of Latinos disapprove of what the party is doing.

According to a Pew Research Center report released back in March, Latinos are shown to be increasingly approving and identifying with the Democratic rather than Republicans.

Despite the decline in approval of President Obama, the Pew report showed that Latinos would still stick with the Democratic when it comes to future elections. When it comes to a congressional race, Latinos have been reported to favor a Democratic candidate over a Republican by 63% favoring the former with 31% favoring the latter.

Although the recent polls shows that a 31% approval for Republicans amongst Latinos isn’t a bad thing for the GOP, it is when it comes to their approval back in 2012. The report shows that in 2012, the Republican party lost the Latino vote 71-27. During the midterm—which was held in 2010—the GOP stood at better odds among Latinos at 60-38.

Even though Republicans may not have the full support, or as high of support as the Democratic party, Democrats should not rest easy when it comes to “having” the Latino vote. If the political climate continues as it is when it comes to the immigration, health, and job debate but sides may find their approval rates dropping further if Latinos decide not to partake in the election process at all and not vote.