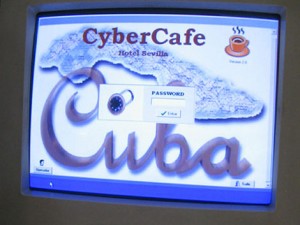 When we open our laptops, flip on our ipads, or search the web on our cellphones we don’t really take the time to acknowledge how easy it is to be connected by easy access to any Wifi hotspot. While we don’t truly see being able to go online as a luxury but a normative, the people of Cuba will probably see their internet access differently than we do.

This Tuesday Cuba began offering public internet access throughout 100 locations on the island. Beginning June 4th, through the state telecom Etecsa people of the country will be able to sign up for temporary or permanent accounts which will enable people to go online.

Back in 2011, Cuba’s internet accessibility began when the country started sending and receiving through a fiber-optic cable that created a data traffic between Cuba, Venezuela, and Jamaica. The link allowed Cuba to receive its first hard-wired connection to the outside world via the internet. Since then the country has been slowly introducing its citizens to the World Wide Web.

“Great! I knew this was coming,” said Camila Delgado, a 44-year-old shop work in Havana, about the new development.

Only 2.9% percent of Cubans are believed to have access to the internet, according to the Cuban government statistics. However, according to reports made by outside observers there are a reported 5 to 10% who are without internet connection. A reported 16% of Cubans are connected to the web via domestic services which can be accessed through workplace or school clubs devoted to using computers.

Apart from the workplaces and school, internet access in Cuba has also been limited to tourist hotels where the service is charged; companies that are owned outside of the country, and some sectors of Cuban government and businesses. Internet access amongst civilians is rare, and if permitted it is restricted.

While the move to grant internet access to the public is showing the country’s progress forward, there are still some hiccups. To use the internet one must go to a computer hub and pay an estimated $4.50 an hour, a price that may be a bit too much for some citizens whose earnings average about $20 per month.

“There’s still a ways to go to be like everywhere else on the planet. We don’t have access at home and prices are prohibitive.” Delgado said, noting her country’s move forward yet it’s possible denial to grant all access to the new service.

On Cuba Si, a Cuban news network site, a man named Osvaldo Ulloa sarcastically commented how the internet service is a “real bargain. I mean, I work for a week and then I get online for an hour—fabulous.”

But price aside, another hindrance to the service is the access of the internet itself.

Although Cubans will be able to go online certain sites will not be accessible. Along with blocking sites containing pornography, sites that may be deemed politically disagreeable by the government will be censored.
The move to have some sites censored can be viewed as an example of the government violating the freedom of its people by disallowing them to fully access the internet without inference. Meanwhile, Authorities claim the limitations are merely to ensure in the benefit of the public by providing a service to be used for work and research.

Despite some of the cons, this is merely Cuba’s first baby steps into opening its doors for its people to see the world that surrounds it.