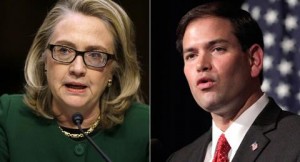 While there are members of the Republican Party already drawing attention about being possible candidates for the 2016 Presidential elections–such members as: US senator Marco Rubio, Governor Jeb Bush, and Representative and 2012 Vice President candidate Paul Ryan–there is one name drawing attention and support amongst the Democratic Party.

That name is former First Lady, United States Senator of New York and 67th Secretary of the United States Hilary Rodham Clinton. And while Clinton has been getting support, Latino voters are largely coming out in support of her becoming our next, first female, President.

According to a poll by Latino Decisions, a Latino political research firm founded by professors of political science Dr. Gary M. Segura and Dr. Matt Barreto, Latino voters were given a hypothetical list of 2016 Presidential candidates which showed 73% of the surveyed Latinos would support Clinton.

The results aren’t so surprising. Back in the 2008 primary election, Clinton held a solid show of support amongst Latinos when she was running as Democratic nominee for President.

The poll surveyed an estimated 1,2000 Latinos, and while showed some support for theoretical Republican candidates, Republicans lagged behind in earning Latino support opposite Democrats.

Amongst Latinos Democrats are largely favored. The growth in support grew last year when 71% of President Barack Obama’s re-election bid came from Latinos who voted for him. Obama’s opponent Massachusetts GovernorMitt Romney only received an estimated 27% of the Latino vote.

The low percentage Romney received in 2012 showed that the Republican Party had a disconnection with the Latino community and could potentially lead to a greater divide come the 2016 Presidential Election.

According to past polls taken to understand the disconnection, Latinos showed what kept them away from voting for a Republican candidate stems from the party’s hard rhetoric on immigration reform which alienated voters in the Latino community from siding with the party’s candidate.

Possible Republican candidate, senator Marco Rubio earned a 31-29 favorable rating amongst respondents. However, half the people questioned did not know who Rubio was despite having a noticeable exposure regarding his participation in the immigration reform being part of the so-called Gang of Eight, a bipartisan group that drafted a measure that would tighten border control yet allow a path to legal status for the 11 million undocumented immigrants living here.

The 2016 Presidential Elections may be in several years, but the move to earn the country’s rising demographic is now. We will have to see what will be an exciting election come 2016.