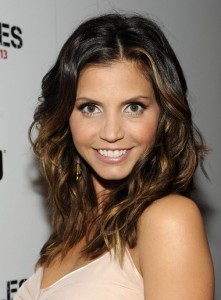 It isn’t an uncommon thing in Hollywood where you may come across an celebrity and discover that they are truly Latino, sometimes it simply because their name or features have no common features normally attributed to Latinos. Or no one seems to ask. And so, actress Charisma Carpenter, 40, has announced to the world that she is Latina.
Back in the 90s and early 2000s, Charisma Carpenter was best known for playing mean girl Californian cheerleader turned demon hunter Cordelia Chase on the hit television series Buffy the Vampire Slayer and Angel. While her portrayal earned her a following, not many people knew that Carpenter was Latina. “I think it’s the best kept secret ever,” she explains, Carpenter’s grandfather was born in Spain and so Carpenter feels, “You need to get it out that I’m a proud Latina!”
According to the Actress, she has been trying to tell people for years that she is Latina but no one believed she was. Discussing this lack of acknowledgement, Carpenter relates that “They’re not buying it. I feel a little rejected by the Latina community. I say that in jest–I don’t sincerely mean it. But I mean…a little bit.” As to why people may not believe she is Latina, Carpenter claims, “I guess I’m too white, too pale. I guess they’ve never seen me tan…I don’t know.”
While she is Latina, Carpenter wasn’t raised to speak Spanish and explains that it was due in part to her grandfather. “My grandfather had a pretty terrible experience being America and being from Spain. He came to this country as an immigrant with his family. He was a crop picker: strawberries, cotton, all that kind of stuff. And what would happen back in those days it that parents would go away and send their small children to a boarding house or orphanage.” Carpenter goes on to mention that her grandfather was taken out of the orphanage at night by his aunt and adopted out to an American family.
After being adopted to an American family due to a crooked operation being held in the orphanage, Carpenter’s grandfather was mistreated and humiliated by his family. “They thought it was so precious and adorable that they spoke Spanish. Carpenter describes that his family would him, “sing in Spanish in front of their friends. Their friends would come over and they were the entertainment, so to speak.” Being mistreated as playthings was quite an ordeal for her abuelo, “He was embarrassed by it, so he chose to forget the language. He refused to speak it. So my parents weren’t raised speaking Spanish.”
Despite her parents not learning how to, Carpenter took it upon herself to learn how to speak Spanish. “I took Spanish since I was in the 6th grade and I lived in Mexico for a couple of years when I was in high school,”–due to her father being relocated to the country for work–“I went to a school that had a strong Latino environment in Southern San Diego–about six miles from the border, so I grew up in the culture.”
The announcing of her being Latina is perfect for Carpenter. This weekend the newly publicized Latina will be attending a Latino Film Festival to show her support for the new film Without Men which also stars fellow Latinas like Eva Longoria, Judy Reyes, and Kate Del Castillo. Well here’s to Charisma Carpenter for being the latest Latina to join all the other Latino Superstars.