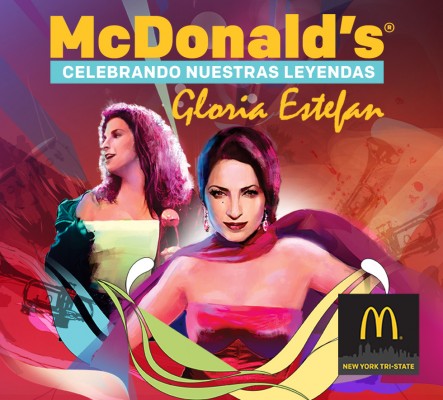 Franchisee-created program recognizes contributions made by Hispanics to the cultural fabric of American society.

Starting Sept 15th, New York tri-state McDonald’s independent owners will pay tribute to Gloria Estefan, the most successful Latin crossover artist of all time, as part of McDonald’s “Celebrando Nuestras Leyendas” (Celebrating Our Legends) in honor of Hispanic Heritage Month.In-store materials that will be found in McDonald’s restaurants throughout the New York/New Jersey/Connecticut Tri-State area as of September 18 will highlight Gloria Estefan’s legendary achievements. Additionally, a QR code will lead guests to an exclusive video-tribute honoring Gloria. Customers can also visit https://www.mcdonaldsnytristate.com/gloria_estefan/to take part in the various activities this program has to offer, including voting for their favorite of two original illustrations created exclusively for McDonald’s: one of Gloria at the beginning of her career and the other featuring the legendary Gloria of today.

“As a Hispanic of Cuban origin and a McDonald’s owner/operator, I’m proud to pay tribute to Gloria Estefan, one of the greatest icons in Latin music. Gloria is a clear example of the influence that Latinos have had on the culture of this country,” said Ana Madán, local McDonald’s restaurant owner and President of the National Association of Hispanic Owner/Operators.

“McDonald’s ‘Celebrando Nuestras Leyendas’ has been hugely rewarding. Through the program, local McDonald’s restaurant owners have recognized Hispanic consumers and employees and paid tribute to the careers of great iconic figures within our culture, all while supporting various charitable causes,” said Madán.

This is the fourth year of the McDonald’s “Celebrando Nuestras Leyendas” program, which pays tribute to Latin legends in the world of entertainment and sports that have made great contributions to American culture. McDonald’s “Celebrando Nuestras Leyendas” also furthers its commitment to community by donating to charities that the honoree supports. This year, McDonald’s ​​New York tri-state area owner/operators will donate to the Gloria Estefan Foundation, which is dedicated to promoting health, education and cultural development.

“I am very grateful to the McDonald’s NY Metro owner/operators for this recognition and support of my foundation,” said Gloria Estefan, adding “it is my honor to be a part of a program that recognizes the cultural contributions Hispanics have made in this country and I love that I can share this honor with those legends who have received it before me.”

With a successful 32-year career, 100 million records sold worldwide, and countless hits such as “Conga”, “Rhythm is Gonna Get You” and “Mi Terra”, Gloria Estefan embodies the great accomplishments that McDonald’s “Celebrando Nuestras Leyendas” celebrates. Her most recent project is another source of pride for the Hispanic community; the musical “On Your Feet!” has its Broadway premier on October 5 and will showcase her vibrant career and music.

To learn more about the program and the Gloria Estefan Broadway biomusical, “On Your Feet!” visit: https://www.mcdonaldsnytristate.com/gloria_estefan/.