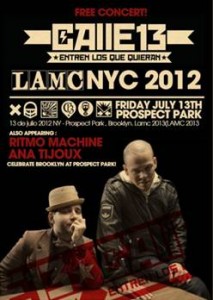 To celebrate the 13th Anniversary of The

As part of the LAMC, Calle 13 will also take part in a special Q&A session with Gabriel Abaroa, President & CEO of the Latin Recording Academy – 10:45 a.m. on Thursday, July 12th http://latinalternative.com/

“Visionary… Few urban acts, in any language, match so much ambition to so much fun. René Pérez might well be the most iconoclastic character in hip-hop — if not all of pop” – The New York Times

“[Calle 13’s] live show is fantastic. René has a very powerful presence, and the band brings such a great mix of protest and music into their mix. I wish that all artists, especially hip-hop artists, could take note of his professionalism and ethics.”- CHUCK D.

In Other Recent CALLE 13 News: Presidential Visits, Superstar Collaborations With Members of Rage Against The Machine & The Red Hot Chili Peppers For The Rights of Immigrants & Indigenous People And Performing For Rice & Beans

Queens boxer Will Rosinsky gets shot at the big time
TWC Bringing Victor Cruz to Queens this Month!
Translate »
%d bloggers like this: