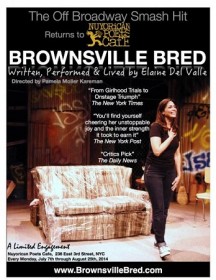 After more than five years, multiple awards, rave reviews, a sold out Off Broadway run, corporate and college tours, and a book deal with Parachute Publishing, Elaine Del Valle’s autobiographical one woman play, BROWNSVILLE BRED, returns to where it all started — Nuyorican Poets Café (236 East 3rd Street, between Avenues B & C, in the East Village).

Directed by Pamela Moller Kareman, BROWNSVILLE BRED begins performances on Monday, July 7 at for a limited engagment through Monday, August 25. The performance schedule is Monday at 7:15 PM. Tickets are $20, and are available by calling 212-780-9386 or visiting www.BrownsvilleBred.com

BROWNSVILLE BRED is the spirited tale of a young Nuyorican girl growing up in the 1980s in one of the most dangerous neighborhoods in NYC. Beginning at the Langston Hughes Projects and chronicling her journey out of Brownsville, Elaine Del Valle’s hilarious and harrowing story is at once frightening, exhilarating and ultimately triumphant.

Brownsville Bred is a critically acclaimed one woman play, written, performed and lived by Elaine Del Valle. The play has won The Network’s “One-Act Festival”, Teatro La Tea’s “The One Festival”, and nominations by The LA Theatre Review and NY Innovative Theatre Awards. It was produced at New York City’s legendary Nuyorican Poets Café, where it reigned as having “the most successful run in the establishments’ 37-year history.” There the play was discovered by Pamela Moller-Kareman (Artistic Director of The Neighborhood Playhouse and Westchester’s Schoolhouse Theater) who went on to co-produce and direct Brownsville Bred to rave reviews and sold-out performances first at Westchester’s Schoolhouse Theatre and then off Broadway at the prestigious 59E59 Theaters, which garnered the story an HOLA (Hispanic Organization for Latino Actors) Award and a book deal currently being packed by Parachute Publishing as a young adult novel.

Visit www.BrownsvilleBred.com for clips and information.