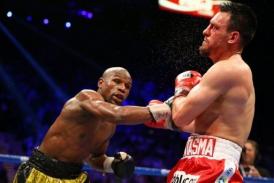 From the third round on, however, the fight was anything but competitive or exciting, as Mayweather, once he found his range, began popping Guerrero with straight right hands at will. Guerrero was clearly outmatched, succeeding only in not getting knocked out from taking so many straight rights.

After 12 rounds, all three judges had scored the bout 117-111 in favor of Mayweather, merely confirming a lopsided outcome expected by most. Mayweather, guaranteed $32 million for the fight, retained his WBC 147-pound championship belt and also captured the vacant The Ring title.

Guerrero, for his role in the affair, went home $3 million richer.