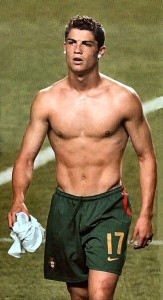 Cristiano Ronaldo dos Santos Aveiro, (born 5 February 1985), commonly known as Cristiano Ronaldo, is a Portuguese footballer who plays as a winger or a forward for Spanish club Real Madrid and serves as captain of the Portuguese national team. Ronaldo currently holds the distinction of being the most expensive player in football history after being transferred from Manchester United to Real Madrid in a transfer deal worth £80 million (€94m, US$132m). In addition, his contract with Real Madrid, in which he is to be paid £11 million per year over the following six years, makes him the highest paid football player in the world.

Ronaldo began his career as a youth player for Andorinha, where he played for two years, then moved to Nacional. In 1997, he made a move to Portuguese giants Sporting CP. Ronaldo’s precocious talent caught the attention of Manchester United manager Alex Ferguson and he signed the 18-year-old for £12.24 million in 2003. The following season, Ronaldo won his first club honour, the FA Cup, and reached the Euro 2004 final with Portugal, in which tournament he scored his first international goal.

In 2008, Ronaldo won the Champions League with United, and was named player of the tournament. He was named the FIFPro World Player of the Year and the FIFA World Player of the Year, in addition to becoming Manchester United’s first Ballon d’Or winner in 40 years. Three-time Ballon d’Or winner Johan Cruyff said in an interview on 2 April 2008, “Ronaldo is better than George Best and Denis Law, who were two brilliant and great players in the history of United.”

On 15 June 2010, in Portugal’s opening 2010 FIFA World Cup match against Côte d’Ivoire, Ronaldo was tackled by right-back Guy Demel, which led to an argument and both being booked. The next day, Portugal contacted FIFA to suggest that Ronaldo’s yellow card be rescinded since he was “pulled into” the confrontation after having already moved away from the spot where he was tackled, but the appeal was rejected.

Ronaldo failed to make an impact in the World Cup; after going scoreless in the qualifiers, his only goal came in Portugal’s 7-0 group stage thrashing of North Korea on 21 June, which marked his first international goal in sixteen months. Portugal were ultimately eliminated by Spain in the round of sixteen.