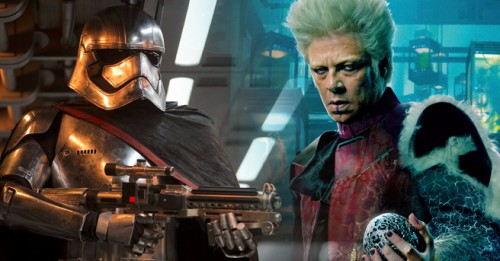 We don’t know much about the eighth installment of the Star Wars Saga. We do know that Luke Skywalker (Mark Hamill) will set to tempo as the first teaser implies. We also will see veteran Laura Dern join the cast and a newbie in Kelly Marie Tran. Yet, a former Oscar winner may hold the key as a possible antagonist.

He is none other than Puerto Rican actor Benicio Del Toro who plays an excellent heel. The best evidence is his previous science fiction role as the wild white haired “Collector” in “Guardians of the Galaxy.”

The story appears to pick up where “Star Wars VII: The Force Awakens” left off. The rumors have Del Toro playing unspecified characters from Admiral Thrawn, to the silent power behind the “The First Order.”

No matter who he plays, Del Toro will leave a mark no Latino actor has left since Jimmy Smits played Senator Bail Organa of Alderan in the three prequel films. Star Wars VIII has started filming but nothing is set in stone as the storyline and characters are shrouded in the type of secrecy that only a Jedi or Sith Lord can unravel. Or a villain with powers not yet experienced in the Star Wars Universe.

Why Ted Cruz becoming our next President of the United States is a Nightmare
STRIKE-BMC READY TO CARRY YANKEES BACK TO THE POST SEASON.
Translate »