It was supposed to be a “stepping stone,” but turns out Adrien “The Problem” Broner prediction regarding his boxing bout against Argentinian boxer Marcos Maidana was a false—a very, very, very false—prediction. Prior to entering the ring at the Alamodome in San Antonion, Texas, Broner danced his way into the arena for his scheduled fight…

However, on his way out of the ring he wasn’t exactly dancing…

Before a crowd of 11,312–versus the possible thousands or millions who watched at home–Broner received his first career loss and title as WBA welterweight champion to Maidana who wasted no time proving to be a real “solution” to “the problem.”

A three-division champion, who has won 27 of his 28 boxing matches, Broner endured a devastating barrage of blows from Maidana. Broner managed through the punishment of jabs and punches. However, out of the nearly one thousand punches he managed to throw Broner was only able to land a recorded 122 power shots to Maidana’s 231.

“The truth is, I’ve never fought anyone like (Broner), and it was a great fight,” said Maidana, 30, after the match holding up his new title belt. “The plan was to fight any way I could do it, and I won because of that.” Maidana said.

While there is much talk about the fight, the main focus came before the fight when Broner called his future fight with Maidana a “stepping stone” in his career. Well, the stepping stone turned out to be quite the boulder.

Although he was no Indiana Jones escaping the barreling boulder, Broner left the ring being held up by two men while being adorned with cups and bottles by the former champion’s fans who were not pleased with his lost. 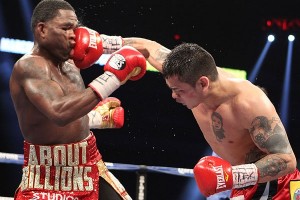 “OK. I’m still the three-time world champion in three different weight classes,” Broner said, at the post-fight press conference. “Tonight, Maidana was just the better man, but we fought a hell of a fight. I hope the fans got what they deserved. … I’m still going to live like we won the fight. I’m still going to party.”

Not wanting Maidana to get too comfortable with the belt, Broner has demanded an immediate rematch.