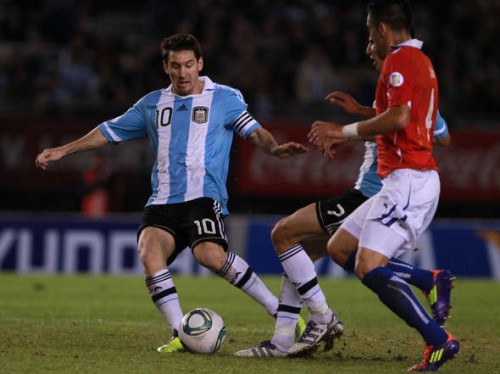 The 44th edition of the Copa America, South America’s premier national tournament this Saturday afternoon, will be most intriging. We have Argentina, World Cup Finalist, who are hungry for a trophy they have not held since 1993. Their opponents will be the hosts, Chile, La Rojo, who have been quite impressive in this competition and historically a tough opponent for “La Albiceleste.”

Argentina, led by Lionel Messi, are a talented bunch who started slowly from Group B, drawing with Paraguay 2-2 in the opener. Then they squeezed by Uruguay, the defending champions, 1-0, followed by another close one, 1-0 over Jamaica. They topped the group but offensively had not shown the potential.

Chile, from Group A, set the tone early with a 2-0 win over Ecuador. They had an exciting 3-3 draw with Mexico, and then blew away Bolivia 5-0 to win the group.

The knockout stage was a revelation as Argentina played its best game in years, outplaying Colombia throughout but not on the scoreboard. It ended 0-0 and in penalty kicks it took Carlos Tevez to hit the winner that put the Argentines over 5-4. In the semi-finals, Lionel Messi was the facilitator as he set up a lot of the goals and after a close first half leading 2-1, Argentina opened up and won going away 6-1 in their rematch with group opponent Paraguay.

Chile disposed of Uruguay 1-0 with a 81st minute goal from Mauricio Isla and put away Peru 2-1 in the semifinals with two Eduardo Vargas tallies and four for the tournament lead thus far. The crowds have made a major difference and it has increased with each victory. But Jorge Sampaoli of Chile recognizes the final hurdle will be the hardest.

“We have achieved something great as a group of players, achieving the dream of playing the final here in Chile.”

“Now we must be well prepared for what is coming.”

That something is the quiet storm, Argentina, who has Messi and scorers in Sergio Aguero and Gonzalo Higuain, or even Angel DiMaria who scored twice against Paraguay. But often it has been the misses that has defined Argentina and not the goals. But they are playing an excellent brand of football now. Chile is motivated by its home cooking and the desire to win their first ever Copa. However, experience and Messi will be the difference as Argentina will win, by a goal most likely, and raise their first Cup since the days of Gabriel Batistuta.

Latino Culture & Speaking Spanish is A Growing Trend in China

Amazon may be sharing your Internet connection with neighbors. Learn how to turn it off

The 10 Richest Druglords Ever!

Poker is a Growing Trend in Latin America

Benicio Del Toro portrays Pablo Escobar in new Film
Fireworks or a Potential Day of Terror This Fourth of July
Translate »
%d bloggers like this: