Andrea Navedo: The Sexy and Funny Mom in ‘Jane the Virgin’

Andrea Navedo: The Sexy and Funny Mom in ‘Jane the Virgin’

With a career spanning nearly 20 years, Andrea Navedo, who always dreamed of being an actress, has worked on TV shows like “Law & Order,” daytime soap operas and dozens of movies and films. “I’m a girl born and raised in The Bronx who always wanted to be an actress, but never thought that it was even a possibility. I just had that feeling inside, but never had any opportunity until I was in college,” Navedo says.

She knows that landing one of the main roles in this popular show on CW is a blessing and a great opportunity. Initially she was afraid that her character could be seen as the stereotype of the sexy Latina who becomes a teenage mother. However, Jennie Urman, the writer and creator of the show, has done an outstanding job giving life and passion to these characters.

“I admit that I was concerned about the character because Latina women are portrayed many times as hypersexual, and it can be negative. But what I love about this character and what the writer did is that they set the audience up for the stereotype and then surprise us. Xiomara is intelligent.

She made some wrong choices, but now she is a responsible mother,” Navedo says. 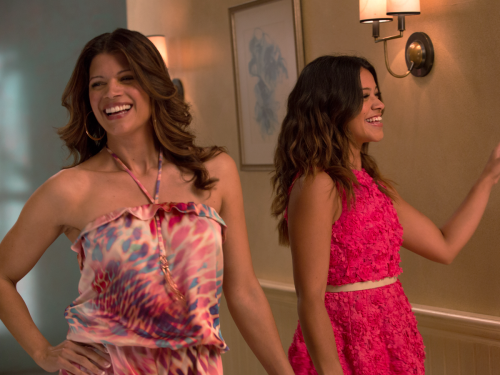 Navedo, besides being a consummate professional, is a wife and mother of two, a 10-year-old girl and a boy, 7, and like most mothers, she is constantly juggling to balance family and a successful career. “I’m shooting the show in L.A. right now. I go home to New York every two weeks for a day and a half. It’s awful,” she admits. “The kids are staying with my husband until we find a good school district and a house in LA.”

This young mother, wife and actress loves what she does, who she is and where she comes from. When asked what is so special about growing up in The Bronx, where two other famous Latinas have become successful in their respective areas, Jennifer Lopez and Supreme Court Judge Sonia Sotomayor, she smiles and responds, “The Bronx could be a challenging place to grow up, but it definitely made me a stronger person and very motivated to go for what I want.”

She recalls her childhood in a bilingual home, watching soap operas with her grandmother. As a teenager, Navedo daydreamed about the handsome lead actors in the novellas without imagining that decades later she would share the screen with one of most popular Latin American soap opera actors: Jaime Camil, and that she would be working on the set of an American series where the characters are bilingual and many speak with thick Spanish accents.

“Accents are beautiful and they bring so much culture and color. Imagine if everyone spoke the same way — how boring life would be.”

“This show is a reflection of what America is today. Everyone loves this comedy because they can relate to the characters and see themselves reflected in them,” Navedo says. The show “Jane the Virgin” is the most real and accurate representation of a Hispanic family in any city in The United States, and Navedo, along with the rest of the cast, are setting the bar really high.

Jane the Virgin Star Gina Rodriguez Chose Not To Be Typecast In Latina Hollywood Role
Throwback: Hanging out With Adrienne Bailon & She Reveals Her Secrets to Looking & Feeling Good
Translate »
%d bloggers like this: