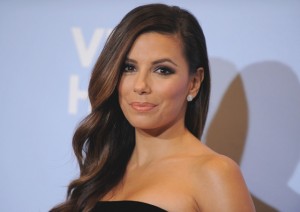 On Piers Morgan Live last night, Latino actress Eva Longoria made it clear that while she is a humanitarian and supporter of fellow Latinos from the Latino community she will not base her vote solely on race if the next Presidential candidate is Latino.

Sitting across from the British journalist, Piers Morgan and joined by Howard Buffett, an American philanthropist, farmer, and author who has written about conservation of wildlife and agriculture, Longoria was candid about her views about a future Latino president.

“How would you feel if we had Latino-Hispanic president, who happened to be, say Ted Cruz or Marco Rubio, so the other side of the divide would be conflicted there?” questioned Morgan.

Despite the star answering the question about what may influence her deciding factor, Morgan continued the questioning by making a comparison to how members of the African-American community may have felt a sense of pride when an President Obama, an African-American man, was voted into office.

“It depends on, like I said, where they stand,” repeated Longoria. The conversation continued when she was then asked a hypothetical question about whether Cruz or Rubio could become elected could she feel anything as a Latino woman, Longoria kept to her beliefs.

“Same reason I wouldn’t vote for [Sarah] Palin because she was a woman,” said, Longoria, “Nor would I have been proud to go ‘ya!’ I don’t agree with where she stands on that, so I wouldn’t necessarily just be proud in that moment because it was a Hispanic.”

Originally on the program with Buffett, whom Longoria presented with the Auburn University’s International Quality Life Award because of his humanitarian cause, the two were to discuss how they are helping to feed the hungry and trying to raise the living wage when the conversation broke away for a moment to discuss about the future 2016 Presidential Elections.

Longoria is no stranger when it comes to the political world. Having been the co-chair of the national re-election campaign which strongly supported President Barack Obama’s re-election is showcase of her commitment to this country’s political realm.

It will be interesting whom Longoria will support when the time comes. Until then the star does leave a subtly important message: do not choose a candidate based on the similarity of race, gender, or orientation but learn what the candidates political views are and decide on whether their political ideals meet your own and you want to support them.